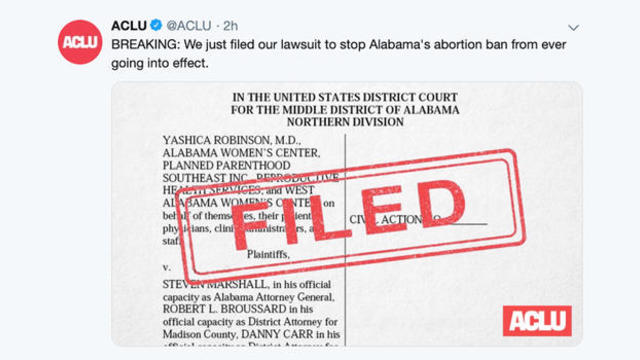 The American Civil Liberties Union and Planned Parenthood on Friday sued the state of Alabama, challenging its new near-total abortion ban that makes almost all instances of performing the procedure a felony. The lawsuit, filed in United States District Court for the Middle District of Alabama, is fighting to stop the bill from going into effect in October. It argues the ban conflicts with Roe v. Wade, the 1973 Supreme Court decision that established the right to an abortion. “The Alabama legislature has been pushing abortion care further and further out of reach for years with medically unnecessary and politically motivated restrictions, and this extreme abortion ban shows us just how far they’ll go to push their anti-abortion agenda,” ACLU attorney, Alexa Kolbi-Molinas, said in a Friday press release. The legislation bans all abortions in the state except when it “is necessary in order to prevent a serious health risk” to the woman, and does not make exceptions for rape and incest victims. Under the new ban, doctors who perform an abortion could face as much as 99 years in prison.

READ IT AT CBS NEWS>