A Los Angeles city councilman has announced that the intersection where Nipsey Hussle was gunned down last month will be named after the hometown rapper.

Nipsey Hussle, born Ermias Asghedom, was known for his community activism in his South LA neighborhood of Crenshaw before his premature death on April 1. He was shot and killed in front of his clothing store, The Marathon, which was located at the intersection of Slauson Avenue and Crenshaw Boulevard — which will soon bear the name Ermias “Nipsey Hussle” Asghedom Square.

The decision to rename the intersection was announced on Tuesday by Councilman Marqueece Harris-Dawson after a Change.org petition for the move was signed by more than 500,000 people.

“Ermias Asghedom known as ‘Nipsey Hussle’ was an icon and West Coast hero,” Councilman Harris-Dawson said, according to the Los Angeles Sentinel.

“Nipsey’s genuine nature allowed him to be a light to everyone he interacted with from family, friends, fans, and his larger community. As a father, brother, and son, Nipsey was a rock helping to build an empire that will continue through generations,” he continued. “Nipsey will always be remembered for delivering a pure, authentic Los Angeles sound, his numerous philanthropic efforts, his innovative, community-focused business mindset, and his humble heart.”

The name change will reportedly be announced at a City Council meeting this week, which will adjourn by entering Nipsey’s contributions into the city’s public record.

Hussle, who was nominated for Best Rap Album at the 2019 Grammy Awards for his album “Victory Lap,” launched several initiatives to improve the safety, education, and technological advancement of his South LA neighborhood.

The 33-year-old father of two co-founded Vector90, the first co-working space in South Los Angeles that provides STEM programs for youth. He also headed the Destination Crenshaw project, which is pioneering a plan for an open-air museum celebrating black culture in LA along the Crenshaw bus line. 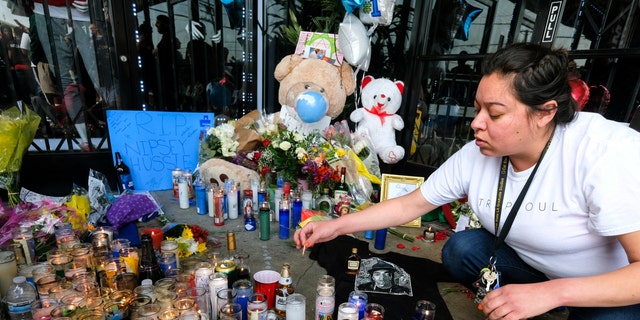 An enormous memorial in Nipsey Hussle’s honor has sprung up in front of his clothing store, The Marathon, where he was shot  (AP Photo/Ringo H.W. Chiu)

On the day of his death, Hussle reportedly made a last-minute decision to run to his “smart store” to get clothes and shoes for a friend who was just released from a 20-year prison term. While there, an altercation took place between Hussle and 29-year-old suspected gang member, Eric Holder. Hussle himself has ties to the Los Angeles Crip gang.

Holder left The Marathon store, then allegedly returned with a gun, and shot Hussle dead. Holder was soon arrested and charged with murder, for which he has pleaded not guilty. Should he be convicted, he is facing life in prison.

A public memorial is being held for Nipsey Hussle at the famed Staples Center in Los Angeles on Thursday. Free tickets for the event sold out in minutes after being made available on Tuesday. It is reportedly the first celebrity memorial to be held at the Staples Center since Michael Jackson’s 2009 service.

In homage to Hussle’s album “Victory Lap,” his hearse is set to ride from his Marathon store and through Crenshaw before arriving at the Staples Center, as the rapper’s final lap.