The police chief in charge of the investigation into Jussie Smollett’s alleged hoax attack said on Monday that there was more evidence which incriminates him on top of the mountain of proof that has already been made public.

Superintendent Eddie T. Johnson appeared on Good Morning America on Monday to defend the Chicago Police Department’s investigation into the attack and double down on his condemnation of Smollett.

He batted away the Empire actor’s claim that a check for the brothers he allegedly paid to attack him was for personal training and said there was surveillance footage, physical evidence, and testimony that proves it was a hoax which is yet to be presented.

‘He still has the presumption of innocence and he’ll get his opportunity in court if he chooses to go that route,’ Johnson said, rejecting Smollett’s lawyers claim that he has been unfairly vilified by the police department and prosecutor’s office.

‘I can tell you this, there’s a lot more evidence that has not been presented yet that does not support his version of the incident.

This is the check Jussie Smollett paid Abimbola ‘Abel’ Osundairo to allegedly beat him on January 29. He backdated it to January 23, according to police. Smollett labeled it ‘5 week nutrition/workout program’ but the brothers say it was for the attack

Chicago police Superintendent on the Jussie Smollet investigation, “I just want people to understand that’s a damaging thing to do to a city.” https://t.co/G4P92ohuFL pic.twitter.com/5idKkrG80f

‘There is still a lot of physical evidence, video evidence and testimony that simply does not support his version.

‘It’s not the Chicago PD saying he did something. It’s the evidence, the facts, and the witnesses saying this,’ he added.

Johnson, who eviscerated the Empire star during a press conference last week after he was arrested, said he was careful throughout the investigation not to jump to the conclusion that Smollett was involved despite growing suspicion among detectives. 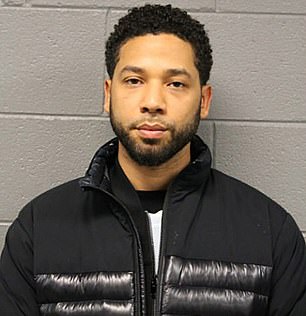 Jussie Smollett is shown in his mugshot on February 21. He maintains he is innocent

‘I refused to let the Chicago Police Department categorize him as a suspect until we had solid evidence,’ he said.

Johnson also said he was ‘acutely aware’ of the police department’s reputation for being racist, which Smollett supporters have invoked in their defense of him, but that it played no role in this investigation.

‘Something like this can be really damaging. We have made a lot of progress in the last three years in terms of race relations.

‘We’re heading in the right direction in terms but are we where we want to be? Of course not,’ he said.

Johnson added that he did not want Smollett’s case to act as a deterrent to true victims of hate crimes, saying: ‘This is just one incident…there are real victims of crimes of that nature, hate crimes, and I just hope people don’t treat them with skepticism.

‘This is one particular incident and it has to stand on its own merits,’ he said.

‘The City of Chicago has its issues. The CPD has its issues with racism and excessive force and all of that, and I am acutely aware of it.

‘[But] we didn’t earn this incident and i refuse to let us have to take that shot if I have evidence to the contrary.

‘It’s my responsibility to make sure the record gets set straight.’

He added that it was ‘offensive’ that Smollett included the claim that a noose was put around his neck by his attackers in his story, given its significance as a symbol of racism.

‘I grew up in the tail end of the civil rights era… the symbolism of a noose is very offensive,’ he said.

After his arrest last week, the Cook County State’s Attorney’s office revealed some of the evidence it had against Smollett at an extraordinary press conference in court.

6 People Killed and 66 Injured in Shootings Over the July Fourth Holidays in Chicago; Cops Seize 199 Guns and Arrest 84 People