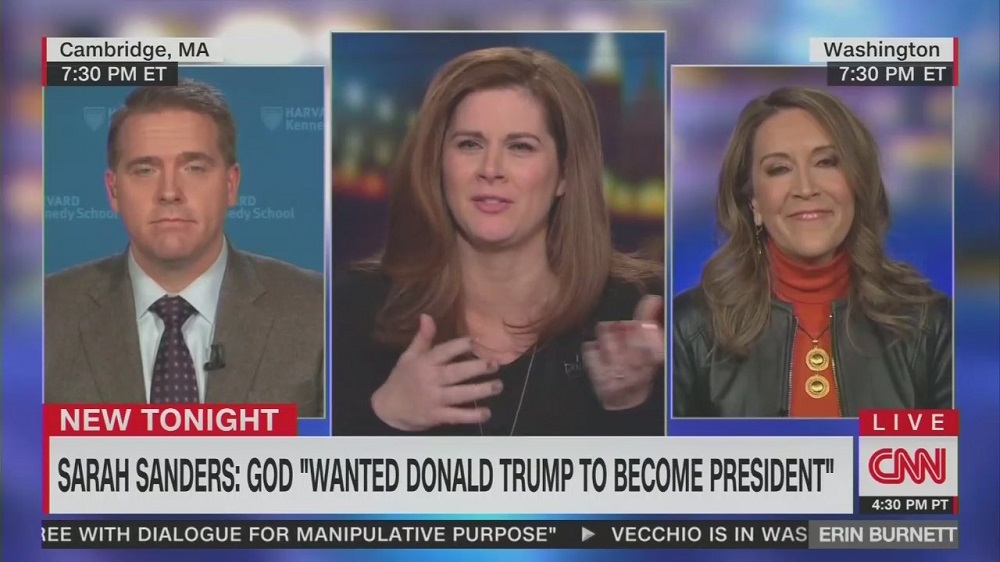 The secular media had difficulty digesting the comments from White House press secretary Sarah Sanders when she said God wanted Donald Trump to be president.

It shouldn’t have been all that controversial. Sarah Sanders was giving an interview to the Christian Broadcasting Network and, speaking of the Almighty, said this:

Sanders: “I think God calls all of us to fill different roles at different times, and I think that He wanted Donald Trump to become president – and that’s why he’s there. And I think he has done a tremendous job in supporting a lot of the things that people of faith really care about.”

Never mind that Sanders’ response is clearly biblical. Romans 13:1 says “the authorities that exist have been established by God.” But at least one secular media outlet reacted as expected. For example, CNN’s Erin Burnett asked Democratic strategist Maria Cardona (both pictured above) to weigh in:

Burnett: “Do you think she’s right? This is what God wanted?”

Cardona: “Wow! Well if he did, it’s because he wanted to punish us for taking our democracy for granted, and for not ensuring that every person went out there to vote – and this is what we got.

“Look, I listened to the whole excerpt of the interview, in terms of what is available, and one huge word jumped out at me: hypocrisy. There was so much hypocrisy in what Sarah Sanders talked about.

“The bottom line is that I can’t imagine that God would put or would want somebody to be the commander in chief, the leader of the free world, somebody who doesn’t understand the words truth, honesty, integrity, humility, honor, forgiveness. I could go on and on about how this president is actually the antithesis of Jesus Christ’s teachings and anything that real Christians would put on the table as something and someone that they would believe in.”