SAO PAOLO, Brazil (RNS) — For decades John of God attracted crowds with his alleged faith healing powers, at first capitalizing on local spiritualist beliefs but soon riding the wave of New Age spirituality to cater to personalities such as Oprah Winfrey and performance artist Marina Abramovic.

In December, John of God, whose real name is João Teixeira de Faria, was arrested after being accused by hundreds of women of sexual crimes perpetrated during healing sessions.

Since the 1970s, Faria, now 76, had performed thousands of “spiritual surgeries,” a technique in which the medium supposedly channels a spiritual physician, who removes the illness from the patient. His approach, which also combined meditation, prayers, crystal healing, herbs and bathing in waterfalls, drew a steady stream of the suffering, disabled and merely curious from as far away as Europe and Australia to Abadiania, a small city about 70 miles southwest of Brasilia.

Victims say Faria would ask a woman attending one of his gatherings to follow him to his office. “The spiritual entities selected you for healing,” he would reportedly tell them. Claiming that physical contact was part of the procedure, Faria would abuse them, reports say, counting on his power as a local celebrity to keep them quiet.

Although the rumors of Faria’s sexual assaults are not new – the Australian version of “60 Minutes” mentioned them in 2014 — the case erupted Dec. 7, when a group of 10 women reported abuses on a TV show presented by Brazilian journalist Pedro Bial. 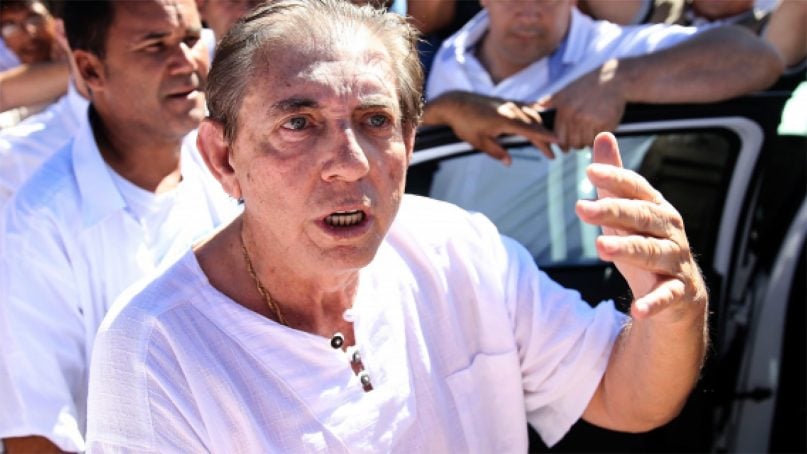 Days later police opened an investigation and solicited complaints via a dedicated email account. On Dec. 16, Faria was arrested after a newspaper revealed that he had taken almost $10 million from his bank accounts and financial investments. Money, firearms and emeralds were found at his house.

At this point, more than 600 women — varying in age from 8 to 67 — have accused Faria of sexual assault. One of them, Dalva Teixeira, is his daughter.

Faria is the product of a uniquely Brazilian combination of religious traditions — popular versions of Roman Catholicism in which saints almost assumed the status of deities, as well as the African-Brazilian Umbanda and Candomblé faiths, and spiritism, the belief that the dead live on as spirits and communicate with the living.

That mix was represented in Faria’s center in Abadiania, Casa de Dom Inacio de Loyola. Founded in the late 1970s, it is named in honor of St. Ignatius Loyola, the founder of the Society of Jesus and one of the spiritual entities Faria claims to channel. Before that, Faria had been a babalaô, the leader of an Umbanda spiritual center.

“John of God is a Roman Catholic and a devotee of St. Rita of Cascia. Everybody wears white clothes at the center, which is an Umbanda tradition, as well as bathing in waterfalls,” said Cristina Rocha, director of the Religion and Society Research Center at the Western Sydney University and author of the book “John of God: The Globalization of Brazilian Faith Healing.” 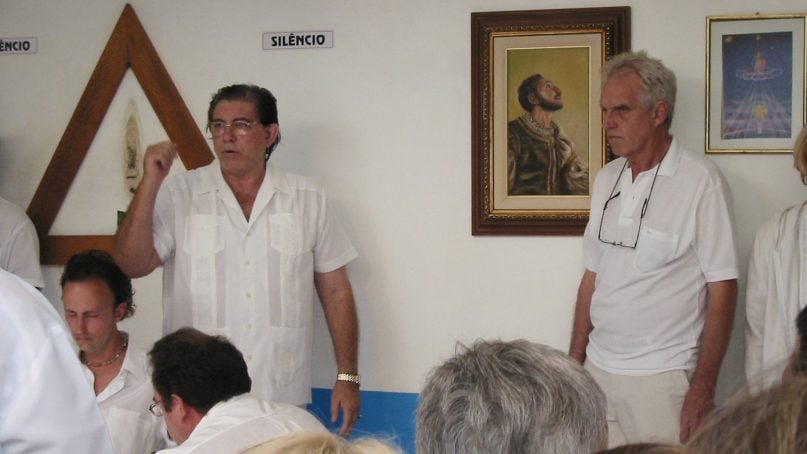 John of God, left, on stage after performing a “psychic surgery” at the Casa de Dom Inacio de Loyola in Abadiania, Brazil, on June 14, 2006. Photo courtesy of Creative Commons

This amalgam of faiths at the Casa is likely why the Brazilian Spiritist Federation – the main organization of the spiritist movement in Brazil that guides thousands of centers in the country – never endorsed Faria’s activities.

As soon as the assault scandal came to light, BSF released a statement to clarify that the spiritist movement “does not recommend the activities of mediums that work on an individual basis.”

Despite BSF’s attempts to distance itself from Faria, “surgery” performed by a medium embodying a spirit is basically a spiritist practice, according to Sandra Stoll, author of a pre-eminent study on Brazilian spiritism.