Over the past two years, few statistics have sparked as much debate both inside and outside evangelicalism as the fact that 81 percent of white evangelical voters picked Donald Trump in the 2016 election. Depending on your views, it’s either a sign of solidarity or one of compromise—a number wrought with opinions and commentary to the point where fact and fiction are blurred.

The statistic has often been used in the media and in academia to represent the idea that all evangelical Trump voters were “all in” for everything that encompasses Trumpism. As Americans (both evangelical and non-evangelical) tried to understand one of the most polarizing and surprising elections in our country’s history, the 81 percent became the go-to narrative for many. It fit longstanding criticisms that evangelicalism had become over-politicized, under-discipled, and hijacked by some of its most belligerent elements.

In the run-up to the 2018 midterm elections, the Billy Graham Center Institute at Wheaton College worked with LifeWay Research to better understand the 81 percent and evangelicals’ political engagement. We polled 3,000 Americans in three categories: those who self-identify as evangelicals, those with evangelical beliefs, and those who neither see themselves as evangelicals nor hold certain core evangelical theological views (such as a belief in salvation through Jesus Christ alone).

Among other insights, the data reveal six key facts about the 81 percent statistic that are worth highlighting. [The institute and CT will feature more analysis in the coming weeks.]

The 81 percent fails to differentiate the motivations behind voting.

In every election, people can vote with varying levels of enthusiasm and confidence in their decision. In an election that was one of the most polarizing in recent history, voters were often more reluctant than enthusiastic about their preferred candidate. For example, the Pew Research Center found in June 2016 that while 78 percent of self-identified white evangelical voters planned to vote for Trump, 45 percent were mainly voting against Hillary Clinton and only 30 percent were voting for Trump himself.

In our survey, we asked, “Which of the following best characterizes how you thought about your vote?” Only half of evangelicals by belief characterized their vote as “voting for their specific candidate.” Across Clinton, Trump, and third-party voters, evangelicals were just as likely to be voting in favor of a specific candidate as for another reason. So, while the who did matter (and 1 in 3 evangelicals said their vote was against Clinton, Trump, or both), the what and the why mattered also.

In fact, many voters chose to look past a candidate as an individual to vote for a specific issue, platform, or party that they represent, seeing the candidates more like objects of representation than as individuals whose values and ideals fit theirs. A majority of evangelicals by belief (59%) agreed that their political support should be tied more to praising or criticizing specific issues rather than individual political leaders.

Put another way, many of Trump’s evangelical voters were not enthusiastic about him as a candidate. 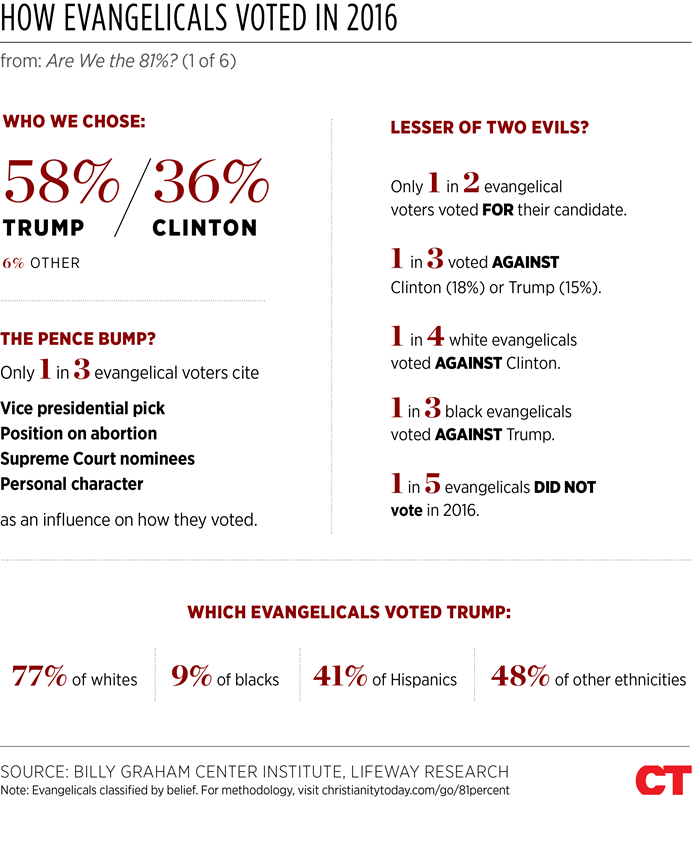 The 81 percent was not primarily about abortion or the Supreme Court.

When asked the most important factor in casting their 2016 vote, the top four answers given by evangelicals by belief were the ability to improve the economy (17%), a position on healthcare (11%) or immigration (10%), and the ability to maintain national security (9%). Religious liberty (8%), the Supreme Court (7%), personal character (7%), and abortion (5%) finished behind.

This breakdown largely remained unchanged when we asked respondents to list any of the factors that influenced their 2016 vote. Once again, the economy (62%), healthcare (55%), national security (51%), and immigration (49%) ranked as the top four factors among evangelicals by belief. While religious liberty came in fifth (45%), only about 1 in 3 evangelicals by belief even listed abortion, the Supreme Court, personal character, or vice presidential pick as one of their influences.

In other words, evangelicals voted more along Republican values than traditional social conservative values. The fact that abortion and the Supreme Court ranked so low is counter-intuitive to the prevailing narrative that evangelicals are single-issue voters.

Most evangelicals are willing to cross parties if given a pro-life alternative.

Abortion nevertheless remains an important issue for many evangelicals. Three-quarters of evangelicals by belief who are pro-life (75%) expressed a willingness to vote for a candidate who was truly pro-life, regardless of political party. Thus, while abortion’s importance in the 2016 election may have been overblown by analysts, it remains a major factor in evangelical voting and represents a major hurdle in their willingness to vote for Democrats with ardently pro-choice platforms.

In 2016 this posed a real challenge for many evangelicals: vote for a major-party candidate with whom they have serious concerns or register their protest by voting third-party. While some might scoff at this problem, it represents a sizable portion of Trump’s support (or those evangelicals who voted third-party or abstained from voting) who believed either choice was a violation of their conscience.

Put another way, while many did value other priorities, some evangelicals certainly chose to vote for Trump because they were pro-life. 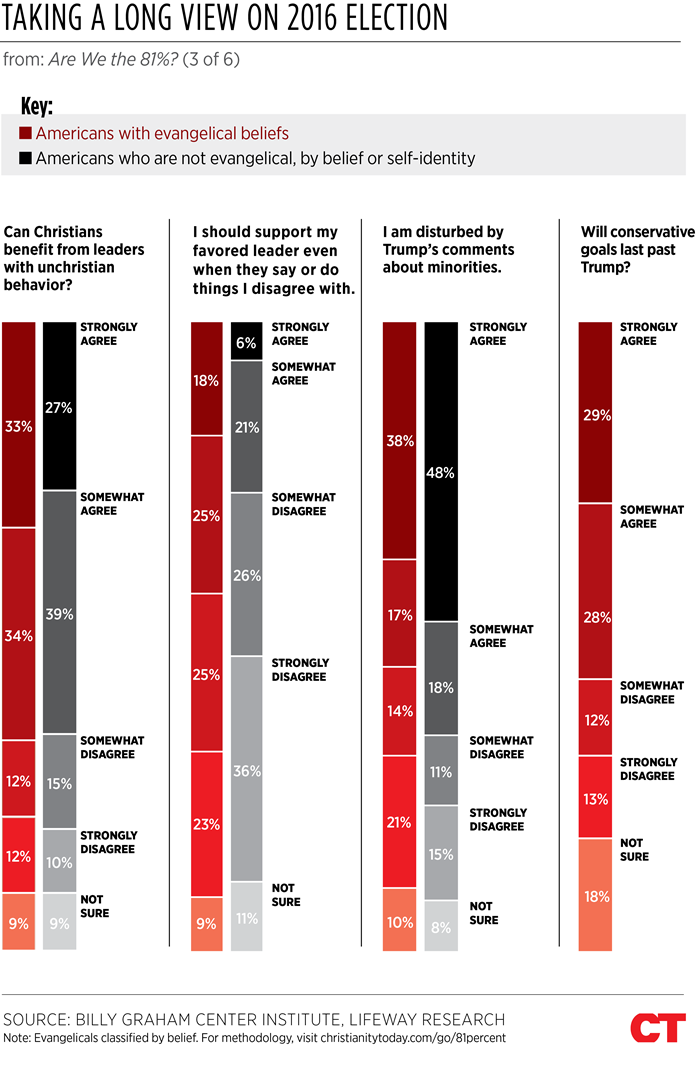 The vote for Trump was about evangelicals’ view of the long run.

A majority of evangelicals by belief (57%) agreed with the statement that conservative goals achieved under Trump would last beyond his presidency (though only 1 in 3 strongly believe this). Whether it is the Supreme Court or religious liberty, many evangelicals appeared willing to accept a presidential candidate who is able to secure policy initiatives they favor in the long term.

Again, this is pointing to an 81 percent that is strategic, goal-oriented, and issue-oriented. Their perception is short-term pain for long-term gain with the decisions around the economy, healthcare, national security, and immigration.

Put another way, it’s true that many evangelicals voted for Trump for the future while overlooking the present.