Samantha Markle has gone on a three-day rant against her half-sister, calling Meghan Markle a ‘ducha**’, comparing her to Donald Trump, and taking swipes at her mother.

‘I am not candy coating anything anymore! The DUCHA** should be humane to our father who has given her everything and this media crap can stop!’ Markle tweeted on Monday.

‘He was the one who was always there for her. Fake waves and smiles can stop. The duchA** can bow to the daddy’.

At one point during her rant, Markle proclaimed that the Duchess of Sussex ‘wasn’t much different than Trump’. 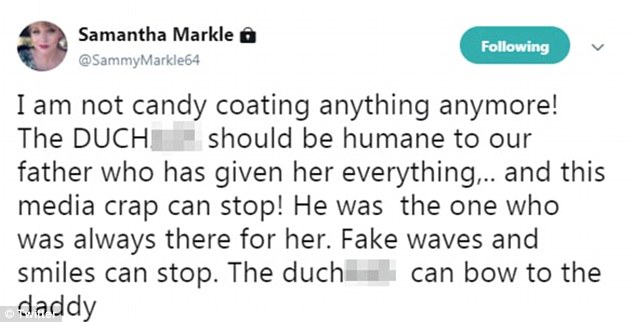 ‘[He] thinks he can shoot someone and still get votes. She can dump an entire family both sides and a best friend of 30 years and ignore it and be popular. Sad,’ she tweeted.

Markle continued with the comparison in another tweet as she hit back at one critic and proclaimed she had the right to express her feelings about Meghan.

‘She was the one who crapped on both sides of the family and she wants everyone to be quiet and not respond?’ Samantha wrote.

‘I am not surprised Trump said he could shoot someone and still get votes. Same mentality here.’

Markle repeatedly referenced Meghan’s former best friend Ninaki Priddy, who like Samantha has been more than happy to speak to the media about the Duchess.

The childhood friends had a falling out after Priddy, who was Meghan’s maid of honor at her first wedding, disapproved of how she broke things off with her film producer husband Trevor Engelson. 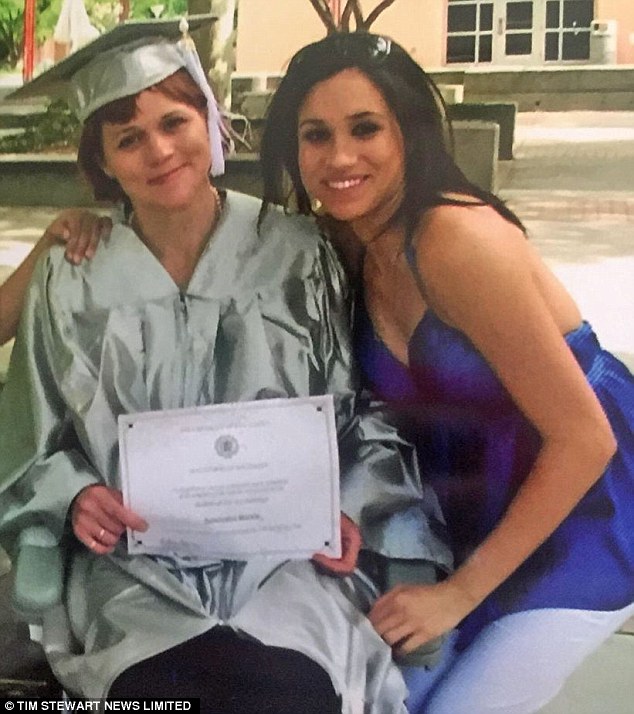 ‘Sorry folks there is no valid or a good argument in favor of inhumane treatment of both sides of the family and a best friend of 30 years,’ Samantha wrote this week.

‘Snobbery and arrogance are not humanitarian traits. She has an obligation especially to treat our father with kindness.’

‘She is not a nice person. It is all an act. Nice people don’t dump everyone…It’s a habit…actually it is an MO she disowns everyone after they are spent.’

Samantha, who changed her last name to Markle after Meghan began dating Prince Harry, even tweeted that she wanted to ‘spoil’ her half-sister’s marriage, before later saying it was a typo.

‘I want to spoil her marriage but she owes it to her dad to treat him with dignity she cannot stop a long ignoring him in fairytale land as if he does not exist,’ she wrote in her first tweet.

Samantha, who changed her last name to Markle after Meghan began dating Prince Harry, tweeted that she wanted to ‘spoil’ her half-sister’s marriage, before later saying it was a typo

‘Correction I don’t want to spoil her marriage but she owes my father a lot of love and respect,’ the second tweet read.

‘No one wants to spoil her marriage and marriage is not at issue. What is at issue is the kind treatment of our dad.’

Markle said that Meghan ‘owes’ her father respect, claiming that Thomas Markle had given the Duchess ‘everything her whole life’.

‘I know you probably call your father collateral damage too,’ she hit back at one critic.

‘Did he do everything for you, pay $250,000 for your college and spoil you always as well as spend his time building your drama class stages?’

‘Just because she’s married to royalty does not mean she can treat people like s**t,’ Markle tweeted during her extraordinary rant.

‘Wake up public! I’ve never seen such an ignorant world in my life. There is more of a burden on her to be good to our Dad as she claims to be a humanitarian.’

Markle also saved plenty of hits for Meghan’s mother, Doria Ragland, commenting on articles that she had made secret trips to the UK to comfort the Duchess amid Thomas’ many public outbursts to the media this summer.

‘Valentine’s Day this year will be interesting. Harry will wake up on the floor, realizing there’s not enough room in the bed for him, Meg, her ego, and her mum,’ she quipped.

She also claimed that Ragland, a yoga teacher in Los Angeles, smoked marijuana.

‘Maybe mommy could bake up some comfort brownies,’ she quipped.

‘That’s right all of her marijuana can’t fix anything…I think it’s part of the problem.’ 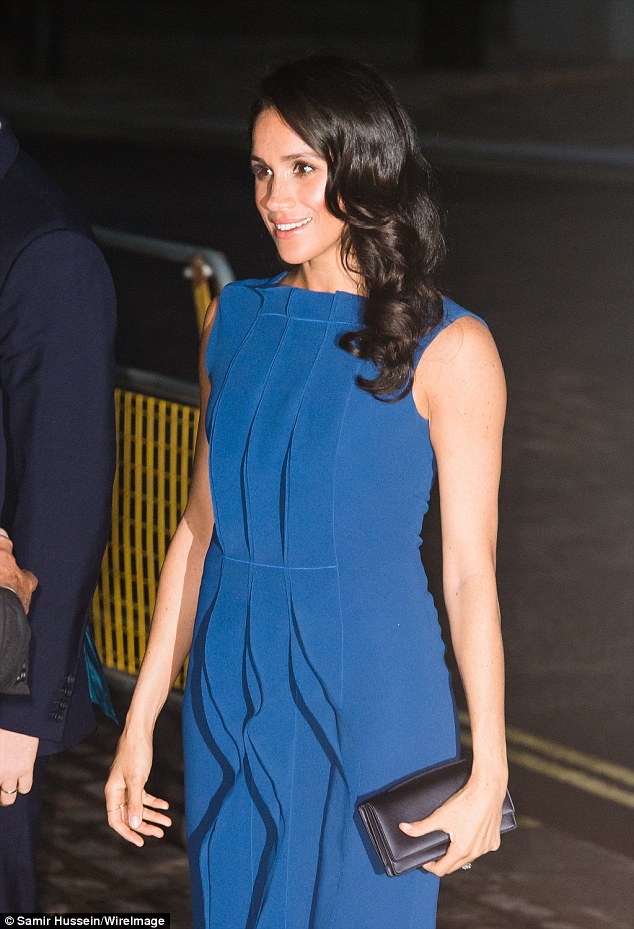 Markle said that Meghan ‘owes’ her father respect, claiming that Thomas Markle had given the Duchess ‘everything her whole life’ 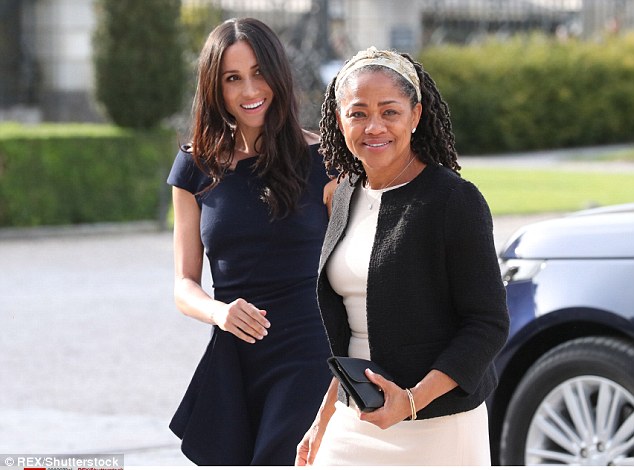 Markle also saved plenty of hits for Meghan’s mother, Doria Ragland, commenting on articles that she had made secret trips to the UK to comfort the Duchess amid Thomas’ many public outbursts to the media this summer

Markle said that her father was only continuing to speak to the media because Meghan was ‘ignoring him for a long time and being snobby’.

‘He has the right to speak and if she doesn’t like it it’s just too f*****g bad she needs to wake up and be a kind person,’ she wrote.

‘Would you allow someone in your family to be continually disrespected and hurt as my dad is and say nothing? I doubt it,’ she tweeted at another critic.

‘After she gives my dad the love and respect he deserves she can skip on her merry way and no one will say anything.’

Markle has previously admitted to ‘cashing in’ on Meghan and the royals.

‘Let’s face it, we all have to survive, money makes the world go round,’ she told Good Morning Britain in July.

‘So if you want to call that cashing in, that’s fine. But no one in media would refuse a paycheck for talking about the royals.’

Markle has been one of Meghan’s loudest critics, which many people are simply attributing to jealousy.

Omarosa Says Trump Is Having ‘Psychotic Episode’ Over Losing Election