Claire Foy fought back tears as she won her first ever Emmy Award just months after a pay scandal centered around her role on The Crown.

The 34-year-old Stockport-native got emotional as she accepted the Best Actress in a Drama trophy at the 70th Annual Primetime Emmy Awards held at the Microsoft Theater in Downtown Los Angeles on Monday night.

Foy – who played Queen Elizabeth – was famously involved in a scandal earlier this year when it was revealed that her co-star Matt Smith earned more than her during the first two seasons of The Crown. 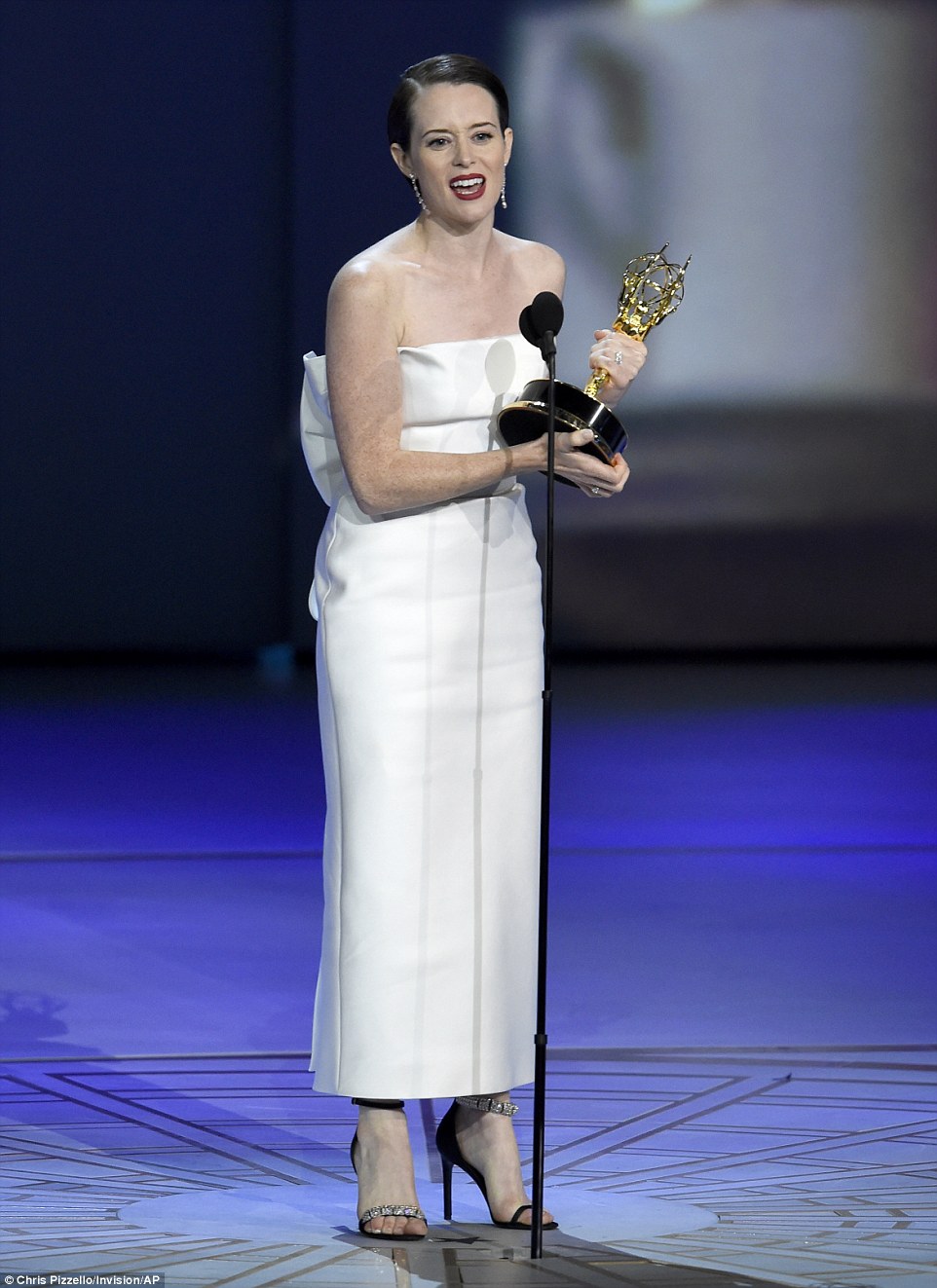 She earned it! Claire Foy got emotional as she she accepted the Best Actress in A Drama trophy at the 70th Annual Primetime Emmy Awards held at the Microsoft Theater in Downtown Los Angeles on Monday night

She ended her speech by addressing how the show is moving on without her and Smith while also giving him a special dedication.

Choking back tears throughout her speech, the English beauty began by saying: ‘I was given a role that I never thought I’d get a chance to play.’

It was her first nomination and first Emmy win.

Claire’s surprise was clear as she started her speech saying, ‘This wasn’t supposed to happen.’

‘I just felt so proud then of being in the company of such extraordinary performers,’ the star said of her acting peers.

‘And I know everyone is talking at the moment about women in the industry but if that’s anything to go by – bloody hell.’

‘Listen, thank you Emmys,’ she continued, ‘I had the most extraordinary two and a half years on this program.’

‘I was given a role that I never thought I’d get a chance to play and I met people who I will love forever, and ever and ever,’ she continued.

‘And the show goes on, which makes me so, so proud.

Back in March The Crown producers Suzanne Mackie and Andy Harries made the shocking revelation when they were asked about the stars’ pay during a panel discussion about the series at the INTV Conference in Jerusalem.

They admitted that he did make more due to his Doctor Who fame, according to Variety. (He starred in the popular BBC series from 2010 to 2014.)

They didn’t explain why Foy continued to earn less than Smith in the second season, after she eclipsed his fame with her award-winning performance.

However the Producers did tell Variety this will change as creative director Suzanne Mackie said: ‘Going forward, no one gets paid more than the Queen.’

There were reports that Foy was set to receive a whopping £100,000 in back pay after the shocking pay gap was revealed but she has since dismissed those reports.

Foy said: ‘It was what was reported that I was back-paid. I’ve never mentioned anything about it and neither have the producers. The fact that that is ‘fact’ is not quite correct…

‘It’s Netflix, but it’s a British production company. It happened at the same time as it was coming out with a lot of other people that there was a lot of pay inequality.

‘It’s across the board that it became part of a bigger conversation, which is an odd place to find yourself in.’