Angel Almaguer backed a waste truck into the middle of a trash storage building the size of a high school gymnasium.

The gate on the back of the truck swung open and everything from tiny baitfish to massive Goliath grouper, huge snook, untold numbers of eels and puffed up puffer fish fell to the concrete ground.

With horseshoe crabs flanking the main pile, the mass of dead fish and sea critters looked like a seafood Sundae from a horror film.

This was the 90th truckload of dead fish and sea debris that’s been processed in the last three weeks at the Lee County Solid Waste facility. From here the carcasses will be transported to the incinerator and burned.

“We make things go away,” said Molly Schweers, Lee County Solid Waste spokeswoman. “If you think about (trash from) a restaurant, it’s just the remains of food.”

Millions of pounds of dead fish have been processed at the facility this month since a strong red tide bloom came ashore and brought untold numbers of dead fish, sea turtles, manatees and dolphins.

“Here we have the opportunity to mix it with other material that will have a higher heat value,” Schweers said. “It’s the same after a hurricane.”

Experts say that only a fraction of the dead wildlife is washing up on local shorelines. Most of the carcasses are either floating at the surface offshore or are at the bottom of the Gulf of Mexico.

This load was from a few of the beaches on Sanibel Island. The amounts of fish and ocean creatures being brought in are slowing down, but the beaches are still being cleaned up. The county and islands have collected millions of pounds of fish and sea creatures after a large Red Tide outbreak. Where does it go in the end? The landfill. Once the ocean creatures are collected from the beaches, they are brought to the landfill, mixed with other trash, and then burned.  (Photo: Andrea Melendez/The News-Press/USA Today)

Red tide counts along the Southwest Florida coast in recent weeks have been at 1 million cells per liter and higher. Fish kills and breathing irritation in humans can begin when levels reach 10,000 cells per liter, according to the Florida Fish and Wildlife Conservation Commission.

Besides the droves of workers collecting dead critters, human activity at the beach has been sparse in recent weeks, and the National Weather Service has extended a red tide beach hazard advisory through Saturday evening for Lee, Collier, Charlotte and Sarasota counties.

Revealed: The 39-Year-Old Border Protection Officer ‘who Shot and Killed his Wife and Their Two Sons, Aged 16 and 12, Before Turning the Gun... 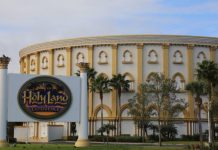 Holy Land Experience in Florida to Lay Off Most of Its Employees, Shut Down 90 Percent of Park After Easter