Meandering off the coast of the Carolinas, Tropical Storm Chris is on the verge of becoming 2018’s second hurricane in the Atlantic Ocean.

While increasing in strength, the storm is forecast to remain far enough offshore that its wind and rain avoid the Mid-Atlantic coastline. But it will generate dangerous rip currents at area beaches, from Ocean City to Myrtle Beach, S.C.

#GOESEast shared this satellite imagery of Tropical #Storm #Chris this morning as the cyclone spins well off the coast of the Carolinas. It is forecast to strengthen into a #hurricane and accelerate northeastward this week. Follow the storm from space: https://t.co/P1F11zXUHI pic.twitter.com/jaQhN3EbSr

Packing winds of 60 mph, Chris is positioned 215 miles south-southeast of Cape Hatteras, N.C. Gradual intensification is forecast over the next one to two days, and the National Hurricane Center predicts Chris will reach hurricane strength by 8 a.m. Tuesday.

The storm is forecast to remain more or less stationary for 24 hours before zipping off to the Northeast on Tuesday into Wednesday. By Friday, it is forecast to be centered just off the coast of Newfoundland. As it encounters cooler waters, it is predicted to begin weakening Wednesday into Thursday.

Until the atmosphere’s steering flow carries Chris away, big waves and dangerous surf are the greatest concern in nearby coastal zones.

“Swells generated by Chris are expected to increase and affect portions of the coasts of North Carolina and the Mid-Atlantic states during the next few days,” the National Hurricane Center said. “These swells could cause life-threatening surf and rip current conditions.” 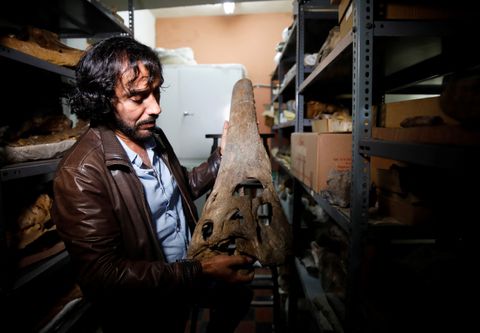