The Revoice Conference, which begins tomorrow, has generated a great deal of conversation among theologically conservative Christians. The gathering, according to its website, is about “supporting, encouraging, and empowering gay, lesbian, same-sex-attracted, and other LGBT Christians so they can flourish while observing the historic, Christian doctrine of marriage and sexuality.” Much of the controversy has swirled around terms used by proponents to describe who the conference is for and what its goals are.

Christianity Today editor in chief Mark Galli asked Revoice founder Nate Collins about the dispute. Collins is former instructor of New Testament interpretation at the Southern Baptist Theological Seminary in Louisville, Kentucky, and a leader at the Center for Faith, Sexuality, and Gender. He is also author of All But Invisible: Exploring Identity Questions at the Intersection of Faith, Gender, and Sexuality(Zondervan, 2017).

What exactly is Revoice?

Revoice is an organization putting on a conference, and the idea behind the conference is to provide a place for conservative LGBT Christians, people who are non-straight and perhaps experienced gender dysphoria of some kind, to gather and to be supported and loved in their attempt to live a long and costly obedience. We all believe that the Bible teaches a traditional, historic understanding of sexuality in marriage, and so we are not attempting in any way to redefine any of those doctrines. We’re trying to live within the bounds of historic Christian teaching about sexuality and gender. But we find difficulty doing that for a lot of reasons.

What are the most common misconceptions of Revoice?

Several people try and make the claim that we’re on a slippery slope ethically, which is due in part to the choice of language we use on our website. Right now the conversation on LGBT issues and gender, sexuality, and evangelicalism is fragmented. There’s a lot of groups of people that use language in very specific ways that makes sense to them but doesn’t make sense to people outside of their tribe.

Revoice is trying to be a place where people who identify as gay or lesbian or bisexual feel like they can be encouraged. We’re not pressuring people. We’re not advocating that people use one language over the other. We’re just trying to make space for people for whom the language they use is meaningful, in terms of how they are trying to reconcile their gender and sexuality with their faith.

You clearly state your views on sexual activity outside of marriage, but some are confused about your views about illicit sexual desire. Is that sinful as well?

Sexual desire for someone of the same sex is sinful and something that I should repent from. But in this regard, some people are being too Freudian. They are basically saying that orientation can be boiled down to a desire for sex. And I don’t think that’s a biblical anthropology. I think a biblical anthropology should reflect something that’s more basic to the human experience, like God created us.

What then do you mean by someone identifying as gay or lesbian, or someone having a particular sexual orientation?

Even the phrase “sexual orientation” can be unhelpful because it puts sexuality at the center of orientation. We are sexual beings; God created us to have sexuality; we will inevitably at some point experience our orientation as sexual. But that doesn’t mean that the orientation itself is a sexual orientation. Now what it is exactly I don’t know—that is something that we Christians have a vested interest in thinking about theologically. But to take our cues from Freud and to consistently boil down orientation to a desire for sex—I don’t think that is helpful, particularly for LGBTQ people who are trying to make sense of their sexuality in a cultural Christianity where their sexuality is taboo, where there is a history of stereotyping, mistreatment, and gay jokes in the pulpit—that kind of thing.

When a person considers himself gay, we tend to understand that he means he is sexually attracted to people of the same sex. But you’re saying that’s not necessarily the case?

That’s exactly right. I think that there’s a lot of the ways that we experience intimacy and desires for intimacy. So the desire to not be alone in your life, the desire to have companionship, to have close, intimate, emotional companionship—these are all things that we experience in relation to orientation that are not intrinsically sexual. To the extent that those desires are neglected or that we fail to integrate those into a theological understanding of orientation—we’re going to have unhelpful pastoral responses in trying to explain how Christianity can still meet the real relationship needs of gay and lesbian.

I’m a typical American baby boomer, an older male who’s lonely a lot of the time. So I get the desire for male companionship. But I don’t imagine you would say that’s a sign that I am gay.

I think that a straight man’s desire, the way he experiences desire for intimate friendship with other men, that is obviously real and is a very valid way of experiencing the God-given need for relationships not to be alone.

For example, when I see beauty in another man and want to have a relationship with that person, it all depends on the context whether or not that is something appropriate that I should follow through on. If I’m visiting a church and I sit next to somebody and am I interested, then I might want to strike up a conversation and perhaps invest in a friendship if we decide to join that church. That’s a very different response from if I’m walking down the street and I notice someone jogging past on a hot summer day not wearing a shirt. It’s a very different perception of beauty, and my response to that perception of beauty is going to be different. Now neither of those on the surface are intrinsically sexual, I don’t think.

While there’s no sexuality involved, at the same time there’s a perception of beauty. There’s a recognition that there’s an image bearer here that is drawing my attention and drawing me into an interpersonal connection with that person.

Yes. One of the main criticisms of Revoice is that we’re trying to blur the distinction between erōs and philia, the brotherly love we’re talking about. There are lots of ways to address that critique.

One way would be to say that erōs is not intrinsically sexual. It’s never how that word is used in ancient Greek. The Greeks had a different word, venus, that was used to describe explicitly sexual love. Erōs is basically the energy of love, the love that drives you [to pursue relationships]. Philia, on the other hand, is the brotherly love of friendship.

But it’s not helpful to drive such a hard distinction between them. We have to recognize that all kinds of loves will motivate us in the way we pursue relationships. And the way to be holy in those moments is to steward those loves well and not to reduce them to things that they don’t mean. Erōs does not mean sexual love. 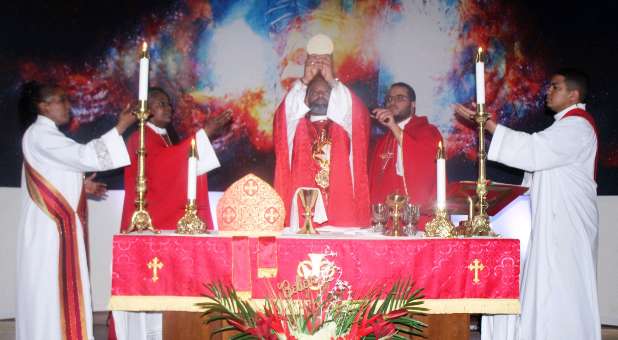 The Rise of ‘Charismatic Orthodox’ Churches

Why Christians Need to Be Meek During This Year’s Elections