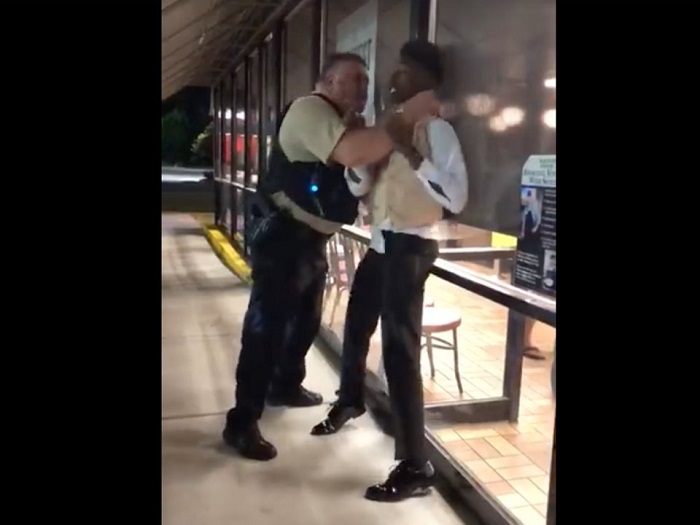 A man who had just taken his little sister to prom was choked and slammed to the ground outside a Waffle House in North Carolina on Saturday.

The arrest of Anthony Wall, 22, has drawn condemnation from the NAACP’s Legal Defense Fund and Bernice King, the daughter of Martin Luther King Jr.

Wall’s is the second forceful arrest of an African American by white officers at a Waffle House in recent weeks. People were enraged in late April when three white officers wrestled a black woman to the ground at a restaurant in Saraland, Alabama.

The incident involving Wall drew national interest after he posted a video of the encounter on Facebook, where it’s been viewed nearly a million times. In the video, Wall is slammed up against a glass window by an officer, who grabs him by the throat and throws him to the ground.

Wall, who was wearing a yellow tuxedo vest, white button-up shirt and black pants during the event, took his 16-year-old sister to her high school prom earlier in the night, reports ABC11. The News & Observer reports Wall got into an argument with the restaurant’s staff and police were called. The newspaper said he faces charges of resisting arrest and disorderly conduct.

Warsaw Police are investigating the incident, Police Chief Eric Southerland said in a statement to ABC11.

The NAACP Legal Defense Fund (LDF), a racial justice legal organization, called the officer’s conduct “grossly inappropriate” and called for an investigation of his body-camera footage as well as surveillance video. The officer, the LDF’s statement adds, should be placed on administrative duty throughout the investigation.

The woman arrested at the Waffle House in Alabama, Chikesia Clemons, had complained about being charged extra for plasticware before being arrested. Although police said her account differs from what they found during an investigation.

12-Year-Old Girl Leaves Father Alive in the Car and Goes Inside of Walgreens, Comes Out and Father is Dead: Texas Father Shot to Death...