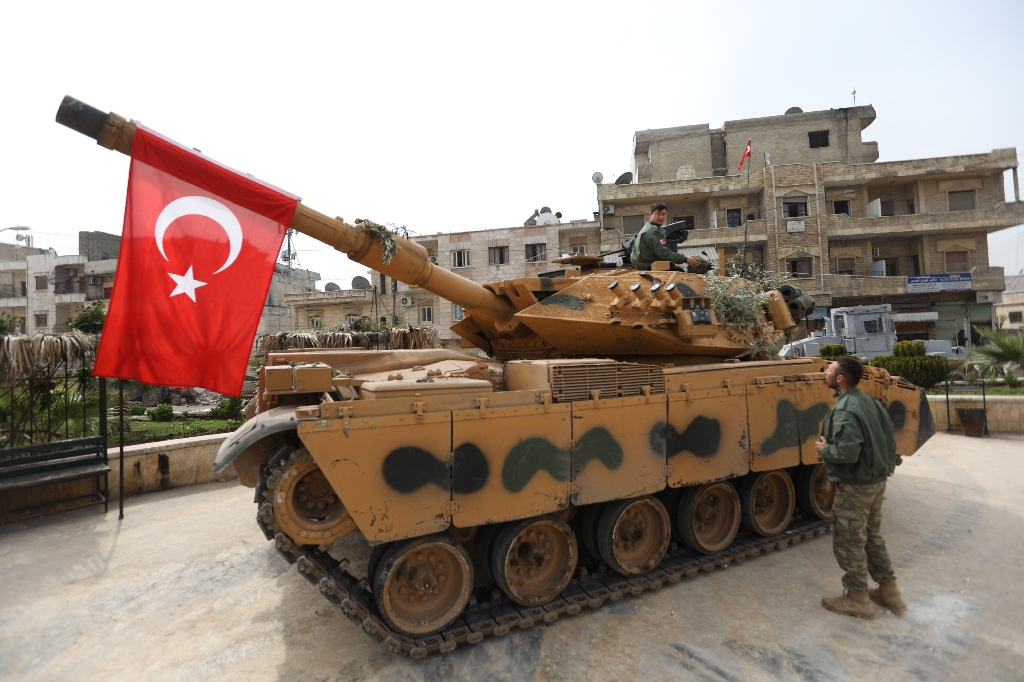 Turkey’s flag was flying in Syria’s Afrin on Sunday after Turkish troops and Ankara-backed rebels chased out Kurdish militia forces to seize control of the northern city.

In a major victory for Ankara’s two-month operation against the Kurdish People’s Protection Units (YPG) in northern Syria, Turkish-led forces pushed into Afrin apparently unopposed, taking up positions across the city.

The advance came as Syria’s civil war entered its eighth year this week with heavy fighting on two fronts — around Afrin and in the rebel enclave of Eastern Ghouta near Damascus.

Hundreds have been killed and thousands forced from their homes by the ferocious assault in Ghouta, where Russian-backed forces loyal to President Bashar al-Assad are battling to retake the last rebel enclave outside the capital.

In Afrin, AFP correspondents saw Turkish forces and their Syrian allies in all neighbourhoods of the city after they made a lightning advance inside on Sunday.

Rebels fanned out across the city, giving victory signs and taking pictures with Turkish tanks parked outside official buildings.

The flags of Turkey and Syrian rebel groups were raised in the city and a statue of Kurdish hero Kawa, a symbol of resistance against oppressors, was torn down.

Civilians were seen fleeing the city and plumes of smoke rose into the sky as mines exploded.

Around 250,000 civilians had left in recent days after pro-Ankara fighters all but surrounded the city, fleeing southwards to territory still held by the YPG or controlled by the Syrian regime.

President Recep Tayyip Erdogan announced that Turkey-backed fighters had taken control of the city centre at 8:30 am (0530 GMT).

Erdogan said a “large number” of Kurdish fighters had “fled with their tails between their legs”.

The Turkish leader has said the operation could move on to other Kurdish-controlled areas of northern Syria.

“Our work is not finished…. but terrorism is finished in Afrin,” Turkish government spokesman Bekir Bozdag said on Twitter.

“Their project of creating a terrorism corridor and a terrorist state has been thwarted.”

Residents said it appeared that YPG units had withdrawn from the city without a fight. Officials with the Kurdish militia could not be immediately reached for comment.

The Syrian Observatory for Human Rights, a Britain-based monitor relying on sources on the ground, says more than 280 civilians have been killed since the campaign began on January 20 — including 16 at a hospital on Friday.

Ankara has denied the reports, including of Friday’s hospital strike, and said it takes the “utmost care” to avoid civilian casualties.

The Observatory said Sunday that more than 1,500 Kurdish fighters had been killed since the start of the offensive on January 20, most of them in air strikes and artillery fire.

More than 400 pro-Ankara rebels have also been killed, it said. The Turkish military says 46 Turkish soldiers have died.

Turkey sees the YPG as a “terrorist” offshoot of the outlawed Kurdistan Workers’ Party (PKK), which has waged a decades-long insurgency against the Turkish state.

But the Kurdish militia has also formed the backbone of a US-backed alliance that successfully expelled the Islamic State jihadist group from large parts of Syria.

Near the capital, thousands of civilians continued to stream out of Eastern Ghouta for a fourth day as the regime’s air and ground assault appeared to have eased up.

Regime fighters have retaken more than 80 percent of the former rebel bastion since the offensive was launched on February 18, the Observatory says, slicing what remains into three pockets each held by different rebels.

More than 1,400 civilians have been killed in the offensive and at least 50,000 civilians are reported to have fled the area in recent days.

Observatory head Rami Abdel Rahman said there had not been any air strikes on Sunday and only sporadic mortar fire into a southern pocket of the enclave held by the Faylaq al-Rahman group.

“The area is awaiting the announcement of a deal between Faylaq al-Rahman and Russia on an evacuation of rebels to northern Syria,” Abdel Rahman told AFP.

Syria’s conflict broke out in 2011 with protests against President Bashar al-Assad.

He has maintained his grip on power despite global calls to step down and outrage at the offensives he has waged to retake towns and cities from rebel fighters.

Israel-Gaza Violence Erupts for First Time Since Start of Ceasefire