Drake claims he only loves his bed and his mama, but it seems he loves Miami, too.

After reading a story in the Miami Herald about the hours-long commutes some Fontainebleau hotel housekeepers endure, the hip-hop star decided to surprise one of the hard-working women with a luxurious spa day and a $10,000 shopping spree.

Odelie Paret, who has worked at the hotel for two decades, received a mysterious phone call from a woman arranging for her to have a massage at the Fontainebleau’s spa and dinner at the property’s steakhouse, the Miami Herald reports.

After the mother of five feasted on a lobster dish, enjoyed the spa and relaxed in the hotel’s opulent lobby — all the while trying to figure out who had gifted her such an unimaginable evening — a car then took her and a friend to Brickell City Centre.

As they stood in front of Saks Fifth Avenue, a hand touched her shoulder, and behind her stood none other than Drizzy himself.

Drake, along with Steelers wide receiver Antonio Brown, were inspired by the feature about Paret’s four-hour work commutes, and arranged to treat her and two other local women to shopping sprees.

“We took the ladies for a nice little shopping spree … giving back,” the “God’s Plan” rapper says in a Snapchat video.

Paret was given no budget and 45 minutes to shop for whatever she wanted from Saks. She landed on a comfortable pair of $800 shoes she could wear to church, a Valentino purse, four perfumes and a $6,000 gold-and-diamond necklace, according to the Herald.

Antonio Brown of the Steelers with Drake pic.twitter.com/zrQWGQKELG

Drake’s kind gesture comes on the heels of several other large donations he doled out like pocket change across Miami.

The OVO Sound founder recently spent $50,000 on everyone’s groceries at a local supermarket, shelled out $50,000 for a women’s shelter, offered a $25,000 check to Miami Senior High after swinging by to film for his new music video and awarded a University of Miami student a $50,000 scholarship. 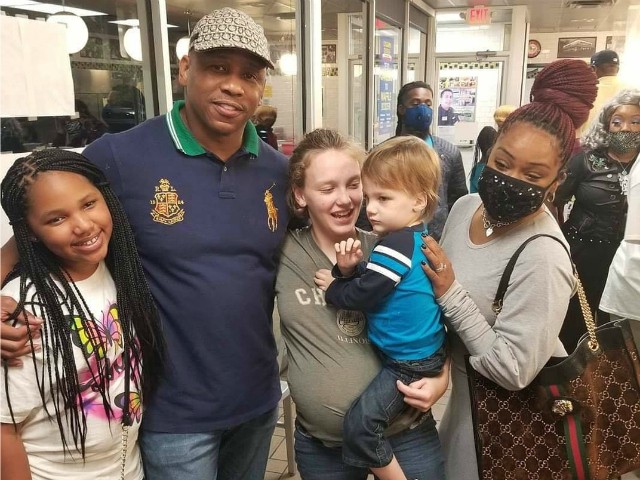