Some polar bears in the Arctic are shedding pounds during the time they should be beefing up, a new study shows. It’s the climate change diet and scientists say it’s not good.

They blame global warming for the dwindling ice cover on the Arctic Ocean that bears need for hunting seals each spring.

For their research, the scientists spied on the polar bears by equipping nine female white giants with tracking collars that had video cameras and the bear equivalent of a Fitbit during three recent springs. The bears also had their blood monitored and were weighed.

What the scientists found is that five of the bears lost weight and four of them lost 2.9 to 5.5 pounds (1.3 to 2.5 kilograms) per day. The average polar bear studied weighed about 386 pounds (175 kilograms). One bear lost 51 pounds (23 kilograms) in just nine days. 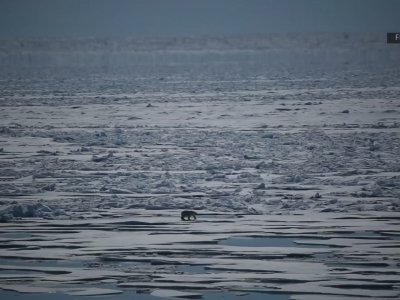 Researchers studied the bears for 10 days in April, when they are supposed to begin putting on weight so they can later have cubs, feed the cubs and survive through the harsh winter. But because the ice is shrinking, the bears are having a harder time catching seal pups even during prime hunting time, Pagano said. The United States Fish and Wildlife Service lists polar bears as a threatenedspecies.

Polar bears hunt from the ice. They often wait for seals to pop out of holes to get air and at other times they swim after seals. If there is less sea ice and it is broken apart, bears have to travel more — often swimming — and that has serious consequences, such as more energy use, hypothermia and risk of death, said University of Alberta biology professor Andrew Derocher, who wasn’t part of the study.

The study found that on the ice, the polar bears burn up 60 percent more energy than previously thought, based on these first real-life measurements done on the ice. A few of the bears travelled more than 155 miles (250 kilometers) in about 10 days off the northern coast of Alaska in the Beaufort Sea, Pagano said. The average bear female burned about 13,200 calories a day — six times more than an active human female.

“Just to break even they have to capture at least one seal every five to 10 days — and that’s just to break even,” said study co-author George Durner, a USGS research zoologist. “And if they don’t do that they’re going to lose weight.”

The ice cover in the Arctic grows in the winter and melts in the summer. Because of climate change, the ice is shrinking and thinning more and earlier, he said.

As the ice dwindles, “we are essentially pulling the rug out from underneath the polar bears,” Durner said.

The bear videos showed researchers all sorts of usually private aspects of polar bear life, including courtship and hunting. They recorded dramatic, and at times, bloody seal hunts from the bear’s perspective.

“You’re seeing everything it is seeing,” Durner said.

Researchers only tracked female bears because males can’t keep collars on — their heads are too small and their necks too big — Pagano said.

Blaine Griffen, a Brigham Young University biology professor who wasn’t part of the study, praised the USGS work, noting that past studies have looked at resting polar bears and polar bears on treadmills in the lab.

In the long run, climate change “will result in smaller bears that produce fewer cubs and that have lower survival rates,” Griffen said in an email.

All over the Arctic, scientists have seen evidence of weakened polar bears, Pagano said. Last month, a video of a starving polar bear went viral, but it is from a different part of the Arctic and unlikely to be related to global warming, Durner said.

“If it’s bad for polar bears, it might be affecting us in other ways — us being humans,” Durner said. “It’s part of a larger picture.”