The daughter of immigrants, she spars fiercely with supporters of President Trump, both on the air and in the Twitter ether.

In early January, Joy-Ann Reid invited Pastor Mark Burns to be a guest on her MSNBC show to discuss disparaging comments that President Trump had made about Haitian and African immigrants. The pastor, a defender of Mr. Trump, refused to acknowledge a vulgarity the president had applied to those countries, as confirmed by two senators. Mr. Burns interrupted Ms. Reid when she spoke and talked over her when she tried to argue. Not one to brook insults from a guest, Ms. Reid called for a “time out” and told Pastor Burns he was wasting her time.

“You’re wasting my time,” he replied. 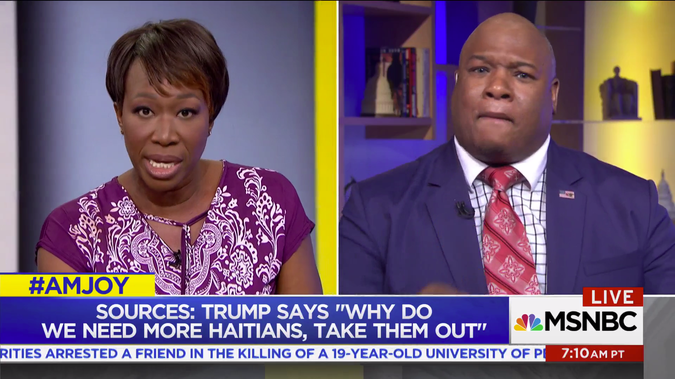 It was a classically no-nonsense performance from Ms. Reid, 49, who has hosted “AM Joy” weekend mornings on MSNBC since 2016. She is a frequent substitute for other show hosts, including Chris Hayes and Rachel Maddow. She wrote a 2015 book on politics and race, “Fracture: Barack Obama, the Clintons and the Racial Divide” — “provocative and well-argued,” Kirkus Reviews said — and teaches a class at Syracuse University exploring race, gender and the media.

In the Trump era, Ms. Reid, the daughter of immigrants, has emerged as a heroine of the resistance to his leadership. And her forceful questioning style, matching that on conservative outlets like Fox, has resonated with MSNBC’s viewers. She is popular on social media with fans who fondly call themselves #reiders. Her morning show on Saturday averages nearly 1 million weekly viewers and, for the last four months, she has bested MSNBC’s competitor CNN, according to Nielsen, which tracks television ratings (granted, her competition then is general newsroom updates rather than another headline personality).

“Our prime directive is to constantly remind people that this is not normal and not to allow it to become mundane,” Ms. Reid said in a recent interview at MSNBC’s studios in Midtown Manhattan, referring to the architecture of the Trump presidency. Each week she makes sure to discuss the investigation into Russian meddling in the 2016 election. “We feel like one of our duties is to keep that story top of mind because it’s fundamentally about whether we truly choose our own leaders,” she said.

Ms. Reid was born in Brooklyn and raised in Denver alongside two siblings mostly by their mother, a college professor and nutritionist from Guyana; their father left the family when she was a child for his native Democratic Republic of Congo. “He was a phone father,” Ms. Reid said. At 17, she was accepted to Harvard University, where she planned to study medicine.

But her mother died of breast cancer three weeks before school started. “I failed a bunch of classes,” Ms. Reid said. “I was just depressed.” She took a year off, returned to Brooklyn — staying with an aunt and working a temp job at Columbia Pictures — and then switched her major to documentary filmmaking.

“I was thinking Hollywood movies,” she said. “Come to find out Harvard doesn’t do that. So I had to study documentary.”

Ms. Reid had also always been captivated by politics. In the late 1990s she moved to Miami to write for a local television morning show. There, she became a fixture among South Florida lawmakers. She was involved in minority outreach for voter education and blogged. In 2005 she met James Thomas, a longtime disc jockey and radio veteran known as James T, who hired her to produce a talk radio show for listeners in the black community.

“I had to convince her of the power we had in radio in Miami,” Mr. Thomas said in an interview. “We were going to go to places people didn’t want to go.” This included Opa-locka, a town marred by gang violence and political corruption whose residents she interviewed. “We had Lou Dobbs on and Marco Rubio,” Mr. Thomas said, laughing, referring to the conservative Fox Business Network host and the Republican Florida senator. “She loved to debate.”

In 2011, Ms. Reid was named managing editor of theGrio.com, a news and analysis website aimed at an African-American audience. (By then she was also writing op-ed columns for The Miami Herald and appearing as a commentator on cable news.) Chris Witherspoon, now a correspondent for the movie ticket seller Fandango.com, was rewriting news briefs for the site when she arrived. Joy said, “‘You are way too fabulous to be behind your desk,’” he recalled. She promoted him to entertainment editor.

When the singer Whitney Houston died in 2012, MSNBC called Ms. Reid to speak about it on camera, Mr. Witherspoon said. “Joy said, ‘I think you should do it,’” he recalled. He did so for a week and went on to appear on other talk and news shows. Ms. Reid, he said, “gave me my voice when I didn’t have one of my own.”

Despite a hectic schedule, Ms. Reid makes time for an extended family. “She is very girlfriend-y,” said Jacque Reid, a television personality who is not related to Joy but has been close with her for a long time. She remembered a party her friend, who lives in Brooklyn, had in December. There were some celebrities, sure. “She also had the women who helped raise her, her cousins and their children. Those are the V.I.P.s in her life.”

Ms. Reid got her television break in 2014 when she was hired by MSNBC to create a daily show called “The Reid Report.” It was short-lived, though, canceled the next year because of poor ratings (along with Ronan Farrow’s). “It was stressful because it was daily,” Ms. Reid said. “There was a lot more management eyes on us. And when it ended, you know, it was not fun. But it did enable me to do something I hadn’t done in my career, which was to actually be a field reporter.”

Many of her stories focused on race in America. In 2015, she went to Mississippi to investigate the death of a man found hanging from a tree, suspended by a bedsheet, which some people said could have been a lynching. “I literally have never had an experience where I felt almost like I was walking through a haunting,” she said. “You could just feel the ghosts of Mississippi past everywhere you went.”

A few months later, Ms. Reid investigated why black churches were being burned down in Southern states, visiting a church in South Carolina that was across the street from a dark forest. “You could almost transport yourself back to the 19th century and see the enslaved people running, you know?” she said. “Everything about it had this omnipresent sort of pallor that I think America doesn’t want to deal with.”

She traveled to 10 states in eight months. “I think it was good for her,” said Phil Griffin, president of MSNBC. “I tried to explain that to her. I said, ‘You’ve got talent. Don’t worry.’” In May 2016, she was named the host of “AM Joy.” The show replaced one hosted by Melissa Harris-Perry, who got into a fight with MSNBC over remarks Ms. Harris-Perry made in an email accusing the cable network of trying to silence her and take editorial control, with suggested “racial implications.”

Ms. Reid has hardly neglected the topic of race, but she also focuses on gender and culture. At the 2016 Republican National Convention in Cleveland she said she watched men walking up and down the street with semiautomatic rifles “because they wanted us to know they had guns” (“us” meaning the media). She recalled a white woman on the elevator praising Mr. Trump for his anti-immigration stance.

“I should have known then that Trump would win,” Ms. Reid said. 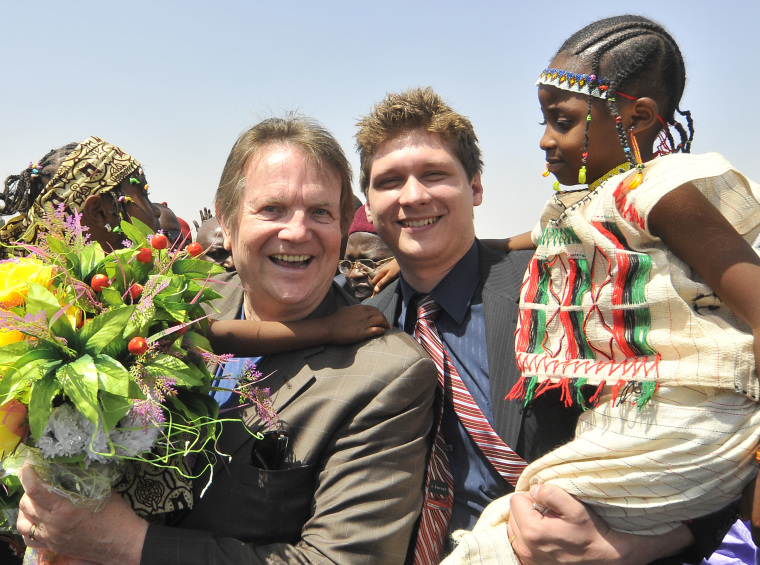