The slaying of five dozen people in Las Vegas did little to change Americans’ opinions about gun laws.

The nation is closely divided on whether restricting firearms would reduce such mass shootings or homicides, though a majority favor tighter laws as they have for several years, according to a new poll from The Associated Press-NORC Center for Public Affairs Research.

The massive divide on stricter limits remains firmly in place.

The survey was conducted from Oct. 12-16, about two weeks after 64-year-old Stephen Paddock fired on a crowded musical festival taking place on across the street from his hotel room, killing 58 and wounding more than 540 before killing himself. It’s the deadliest mass shooting in modern U.S. history.

In this latest survey, 61 percent said the country’s gun laws should be tougher, while 27 percent would rather see them remain the same and 11 percent want them to be less strict. That’s similar to the results of an AP-GfK poll in July 2016.

Nearly 9 in 10 Democrats, but just a third of Republicans, want to see gun laws made stricter.

Kenny Garcia, a 31-year-old resident of Stockton, California, and a former gun owner, said he’s torn about whether tighter gun laws would lead to a reduction in mass shootings.

“That’s the hard part,” Garcia said. “How do you control something like that when you have no idea where it’s coming from, whether you control the guns or not?”

Still, he’s frustrated by easy availability of some devices — such as the “bump stocks” used by the Las Vegas shooter to make his semi-automatic guns mimic the more rapid fire of automatic weapons.

“They give people access to these things, then they question after something horrible happens, but yet the answer is right there,” he said. “It just doesn’t make sense.” 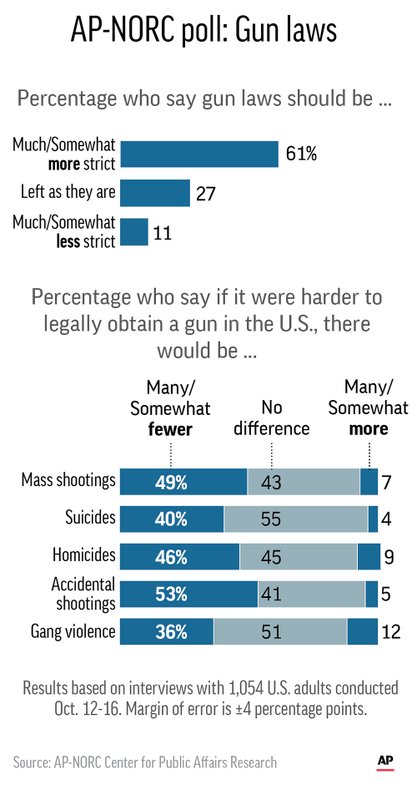 Alea Leonard, a 21-year-old data analyst and full-time student, said she’s torn about whether the nation’s gun laws should be more strict, in part because different parts of the country have different experiences with crime.

“Here, I feel like everyone should be able to carry a .22 (caliber handgun) on them,” said Leonard, who lives in Orange County, California. Her neighborhood, she said, has a high crime rate and in the five months since she moved there, a 14-year-old was shot in the back of the head.

She grew up in California, but spent some summers in Wyoming. She never before felt the need to have a gun but is now researching what it would take to carry a firearm.

There are indications of a generational divide on the issue. Most of those in the survey who are younger than 30 said they believe stricter gun laws would result in fewer mass shootings, homicides and accidental shootings.

The poll also found that a majority of Americans disapprove of how President Donald Trump is handling gun control. Trump is the first president since Ronald Reagan to address the annual meeting of the National Rifle Association. One of his sons has voiced strong support for easing the restrictions on gun silencers.

The poll also showed Americans divided over which party, if any, they trust to handle gun control. Close to a third give Democrats the edge while 28 percent prefer Republicans, and 31 percent say they don’t trust either party.

The AP-NORC poll of 1,054 adults was conducted Oct. 12-16 using a sample drawn from NORC’s probability-based AmeriSpeak panel, which is designed to be representative of the U.S. population. The margin of sampling error for all respondents is plus or minus 4.0 percentage points.

Beloved Christian Doctor Robert D. Lesslie Who Was Killed in South Carolina Shooting Along With His Wife and Two Grandchildren Wrote About Angels, Miracles,... 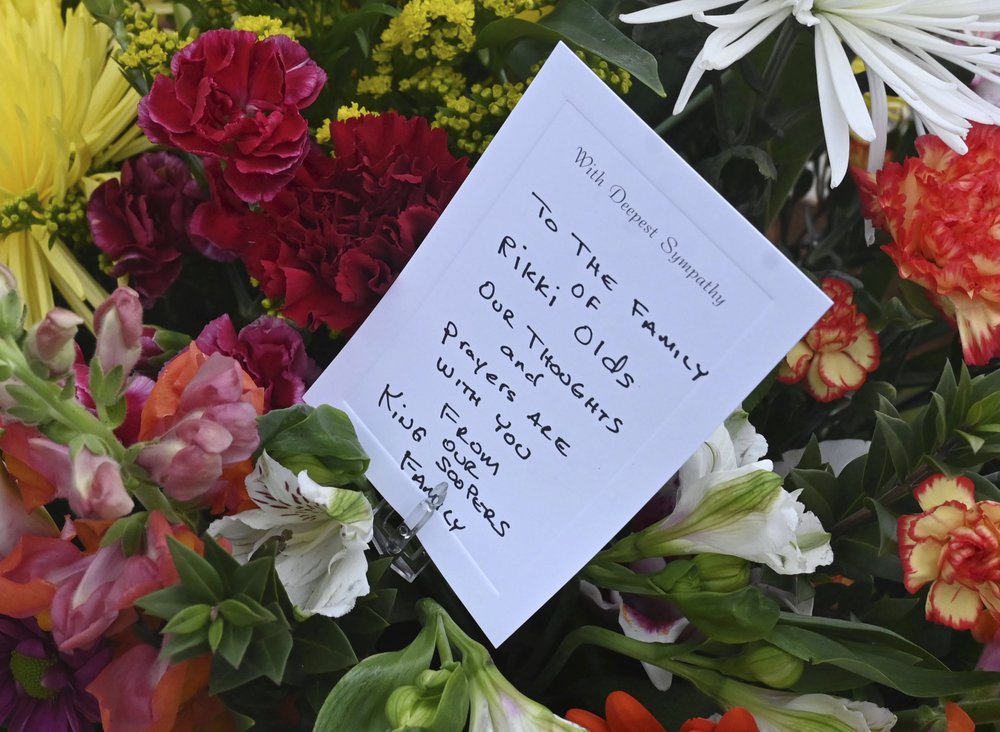