Seattle Mayor Ed Murray resigned on Wednesday after a fifth man publicly accused the Democrat of molesting him as a child.

Nelson was never convicted for the previous alleged abuses, which allegedly included inappropriate behavior with a five year old in 1982 on the school bus that Nelson was driving at the time.

Nelson is the father of Patrick Nelson, a Democratic 2018 congressional candidate who served as one of Vermont Sen. Bernie Sanders’ delegates at the 2016 Democratic National Convention.

Former Ohio mayor Richard Keenan, a Democrat, was handed a life sentence in April 2017 after he pled guilty to repeatedly raping a four-year-old girl, WFMJ reported.

Keenan, who was first indicted in August 2016, will be eligible for parole after serving 10 years. He claimed during the trial that the four-year-old was a “willing participant.” 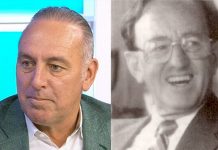 There’s a devil loose: ‘Disgusting’ pedophile doctor who set aside $2,000 a month to pay for hotel rooms, sex toys and lingerie for his...