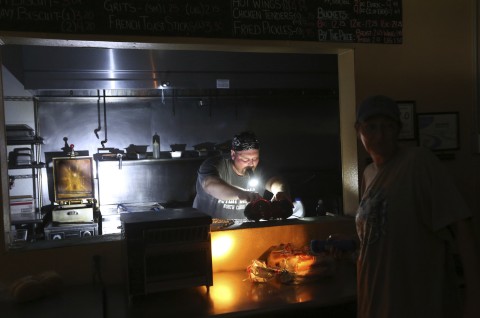 A dreamy summer vacation turned into a messy, sweaty nightmare for 10,000 tourists on the Outer Banks when the power went off and air conditioners stopped humming, and officials ordered visitors to leave Friday because the outage could last days or perhaps weeks.

People and cars lined up to get on ferries, the only way off Ocracoke Island. Gas stations ran perilously low on fuel and ice. Workers at a cafe improvised by using flashlights to make sausage biscuits on a gas stove and people searched for anything cold to eat or drink in the thick, humid air.

Two restaurants on Ocracoke were using generators to stay open, but the motel Lazure booked for her vacation closed when its generator exploded minutes after it was started.

“This is a beautiful island and I waited two years to come back here because it’s one of my favorite places in the world,” she said. “I’m a little bummed that the power has gotten in the way, but, till next time.”

Ocracoke and Hatteras Islands went dark on Thursday when a construction company building a new bridge between the Outer Banks and the mainland drove a steel casing into an underground transmission line. The company, PCL Construction, was digging at the site Friday to determine the extent of the damage. Officials said it could be days or weeks before it’s fixed.

North Carolina Gov. Roy Cooper declared a state of emergency as generators were sent to the islands. Officials urged people to use them only for fans and refrigerators so that they would not overload them.

The islands, which have about 5,000 permanent residents, rely heavily on the summer tourist season for their local economies and business owners worried about how long they would be shuttered.

Ann Warner, the owner of Howard’s Pub on Ocracoke Island, said she has generator power, but business had dropped as tourists streamed off the island. Her restaurant would usually be packed for Friday lunch.

She and other business owners were upset at losing business at the peak of tourism season because of human error, as opposed to tropical weather such as a hurricane.

“This is a man-made disaster, and yes people are very upset,” she said.

At a deli-cafe located in the back of the Island Convenience store, Aaron Howe held a flashlight in his mouth as he made sausage biscuits on a gas stove.

“It’s the only location in town where you can get a bite,” Howe told The Virginian-Pilot. “It might take a while but we’ll get it done.”

But it’s cash only with the registers down. Ice cream was selling for half price at the Slushy Stand as people tried to keep cool.

“Believe me, it was a little toasty last night,” Andrea Wayda, of New Jersey, told the newspaper Friday morning before she and Patrick Jobe left on a ferry. The two had stayed in a cabana with a pool during their visit.

Once off the island, tourists may face a slow, crowded ride as they maneuver N.C. Highway 12. The two-lane road is the only north-south roadway along the Outer Banks.

Rob Temple, a boat captain on Ocracoke Island, had a large group booked for Thursday night, but only a handful of people showed up after the power outage. Still, he took it in stride Friday as he waited in a line of cars for a ferry off the island to take his daughter to a movie in Nags Head.

“We get hurricanes sometimes in the middle of the season and you have to be prepared for this,” he said. 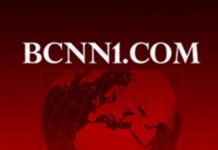