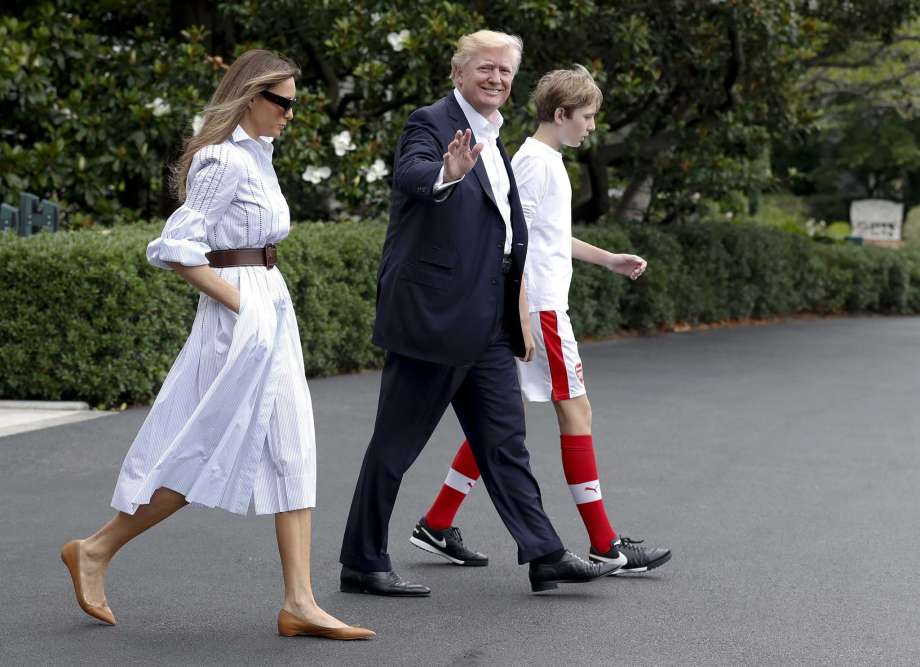 Nearly five months into his presidency, Trump flew for the first time Saturday to Camp David, the government-owned retreat in Maryland’s Catoctin Mountains. A frequent weekend traveler, Trump has favored his palatial residences in Florida and New Jersey over the wooded hideaway used by many presidents for a break from Washington.

Few expect the luxury-loving leader to make this a regular thing. After all, Trump told foreign newspapers earlier this year that Camp David was “very rustic” and “you know how long you’d like it? For about 30 minutes.”

Trump’s wife, Melania; their son, Barron, and the first lady’s parents, Viktor and Amalija Knavs, joined the president for an overnight stay at Camp David. Trump was to return to the White House on Sunday.

Presidents have been going to the refuge about 70 miles from the White House for seven decades, and not always just for a rest. Franklin D. Roosevelt met with British Prime Minister Winston Churchill there in 1943, reviewing plans for the invasion of Normandy. Jimmy Carter used it for peace talks between Egypt and Israel. George H.W. Bush’s daughter Dorothy, or “Doro,” got married there.

“Everything that a president needs in the White House is built in there,” says Anita McBride, who was first lady Laura Bush’s chief of staff. “You have military support. You have a place to house your staff if you chose to use it. It is immediately available. … Within 20 minutes you can be there.”

A short drive from the town of Thurmont, Maryland, Camp David covers more than 125 acres, with a cabin for the president and about a dozen cabins for guests. There are tennis courts, a heated swimming pool, a bowling alley and a movie theater. For the golf-loving Trump, there is a single golf hole with multiple tees.

Protected by the Marines as part of the Navy budget, Camp David has been utilized more by some presidents than others. By this point in their presidencies, Barack Obama had visited four times, George W. Bush 11 times and Bill Clinton twice, according to CBS News’ Mark Knoller, who tracks presidential travel.

Locals haven’t seemed too concerned about when Trump might show up. As lifelong resident Donna Bollinger, 63, put it, Thurmont often barely knows when presidents are nearby, given the secluded nature of the retreat.

Now the manager of the Bollinger Family Restaurant, she recalls as a child seeing presidents come to the town’s Episcopal church. “I remember Mr. Eisenhower. I remember Mr. Johnson being there, and Mr. Nixon,” she said.

So far, Trump has preferred his own properties. He regularly headed to his private club Mar-a-Lago in Palm Beach, Florida, during the early days of his administration, embracing it as the “winter White House” and using it to host the leaders of Japan and China. More recently he has favored his golf club in Bedminster, New Jersey, where he has a home.

Going to his properties incurs additional security expenses, unlike a trip to Camp David, which is protected year-round as a military installation.

Ken Walsh, chief White House correspondent for U.S. News & World Report, wrote about presidential getaways in his book “From Mount Vernon to Crawford: A History of the Presidents and Their Retreats.” He said many presidents have liked the freedom and security offered by Camp David, where they can spend time outdoors and with their families out of the public eye.

But he said of Trump: “I don’t think it is his style. I’d be surprised if he went up there very much.”

The first president to use the retreat was Roosevelt in 1942. He was looking for an escape from Washington’s summer heat, while still remaining nearby during World War II. He dubbed the site Shangri-La, but Dwight Eisenhower, a regular visitor, later renamed it after his grandson.

John F. Kennedy and Lyndon Johnson were infrequent visitors, though they did use the camp to meet with advisers from time to time. Richard Nixon was a fan of getting away there as was Ronald Reagan.

McBride said George W. Bush loved to ride his bike around the trails, while wife Laura liked to go hiking. “It was a place that really refreshed them,” she said.

If Trump doesn’t make it to Camp David much, Bollinger said she’d love to go in his place.

“I would like to visit, too. They have a bowling alley,” she said. “It would be a great tourist attraction.”