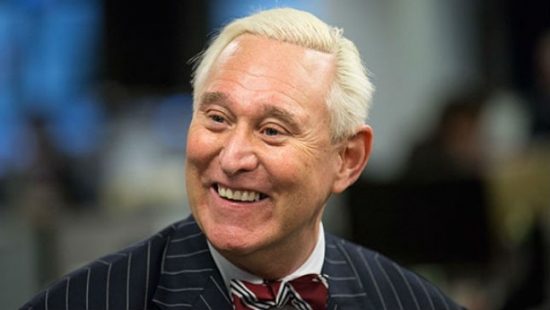 Roger Stone, the legendarily hardball Republican operative who for years has lustily embraced such media epithets as the dapper don of dirty deeds and the undisputed master of the black arts of electioneering, now finds himself on the receiving end of what he calls a political dirty trick –– allegations that he helped mastermind Russian leaks of hacked Democratic Party emails –– and he’s not liking it much.

“You just wake up one day and a bunch of congressmen are kicking your balls across the field,” Stone said reflectively. “Based on nothing more than a Hillary Clinton campaign meme…. I understand. It’s politics. It’s the democratic process. All I want is the same open forum to respond.”

A steady drumbeat of accusations against Stone that had been building for months –– since a Jan. 19 story in The New York Times identified him as one of three associates of President Donald Trump under FBI investigation for links between Trump’s presidential campaign and Russia –– reached a crescendo this week, when Stone’s name was mentioned 19 times during a hearing of the House Intelligence Committee.

None of the references to Stone were flattering. And most ran along the lines of an attack by Rep. Denny Heck, D-Washington, who included Stone among a “rogues’ gallery” of Trump operatives “who fall somewhere on that spectrum from mere naivete … to unwitting Russian dupes, to willing blindness, to active coordination.”

Since then, the Senate Intelligence Committee has warned Stone not to destroy any written records that could pertain to the investigation. And it’s scarcely been possible to turn on a TV set without hearing calls for Stone to be politically tarred and feathered, or at least subpoenaed.

The latter would be fine with Stone, who would love a nationally televised forum to counterattack accusations that he labels acts of fact-free political vengeance by enemies he helped whip in the election. The only thing he’s guilty of, he says, is “political showmanship.”

“Don’t confuse me with the character I sometimes play, Roger Stone,” he said. “Millions of people buy my books and watch me on [right-wing radio and streaming-video show] Info Wars. They like my style, and yeah, there’s a certain element of over-the-top to my style. But in today’s rapid-cycle media universe, if you don’t have some political flamboyance, you’re nowhere, you’re left behind.”

In an episode fraught with many ironies, among the most profound is that Stone, a longtime associate of Trump who has worked for him mainly on the political aspects of the casino business, wasn’t actually employed by Trump’s presidential campaign last year when the seeds of the Russian hacking controversy were planted.

He had been ousted by the new political team Trump assembled when he formally announced his candidacy. The two, however, remained in touch, much to the displeasure of then-campaign manager Corey Lewandowski. “It was driving Lewandowski crazy,” says one member of the team. “He’d change Trump’s cellphone, and a couple of days later, Stone would get the new number, and they’d do it all again.”

Nor, so far as anybody can tell, was Stone around for the opening shots of the hacking controversy. It started in mid-June last year when the Democratic National Committee disclosed that a private cybersecurity firm had discovered two separate penetrations of its computers by hackers.

The company, CrowdStrike, said the penetrations were done by two separate groups of hackers, one associated with Russian military intelligence and another with the FSB, the current name for the spying agency formerly known as the KGB. The penetrations had begun in 2015 and the hackers had stolen two documents from the DNC computers, CrowdStrike said.

Almost immediately, someone calling himself Guccifer 2.0 (the name clearly an homage to, or an attempt to confuse with, an infamous imprisoned Romanian hacker), began an internet blog in which he took credit for the hacks. He mocked the claim that only two documents had been purloined by attaching a dozen or so more, and added: “The main part of the papers, thousands of files and mails, I gave to WikiLeaks. They will publish them soon.”

Over the next couple of weeks, Guccifer 2.0 posted dozens more documents from the DNC hacks. And, frustrated that he wasn’t getting more attention, he announced he had a Twitter feed and invited reporters to send him questions there, which he would answer in his blog.

On June 30, he did, offering some general tips about how he got into the DNC’s computers and mocking the claim that he was a Russian. “The guys from CrowdStrike and the DNC would say I’m a Russian bear even if I were a Catholic nun,” he jibed. Guccifer 2.0 said only that he was born in Eastern Europe, which he would later modify to Romanian. (Four months later, U.S. authorities would conclude the hack was done by Russians, though some privy computer security experts say the case is far from proven.)

Guccifer 2.0’s claims, though much-discussed in the world of cybersecurity, got relatively little attention in the mainstream U.S. press. And that was when Stone entered the picture.

On Aug. 5, following a Democratic convention at which Russian hacking was a frequent subject, Stone published a story on the website Breitbart (one of two conservative sites –– the other is the Daily Caller –– to which he regularly contributes) arguing that the culprit was not the Russians but Guccifer 2.0. Aside from some of Stone’s customary political invective, the story was based entirely on Guccifer 2.0’s publicly accessible tweets and blog posts. There’s no evidence in it that Stone had communicated with Guccifer 2.0 in any way.

But two weeks ago, The Smoking Gun website reported that Stone “in the months before Election Day” was “in contact with the Russian hacking group that U.S. intelligence officials have accused of illegally breaching the Democratic National Committee’s computer system.” The contact “came via private messages exchanged on Twitter, according to a source,” said the story. It didn’t report anything at all about what the content of the messages between Stone and Guccifer 2.0 was.