President Trump on Monday reignited the war over abortion by signing an executive order blocking foreign aid or federal funding for international nongovernmental organizations that provide or “promote” abortions.

The so-called Mexico City policy, established by Republican President Ronald Reagan in 1984, blocks federal funding for international family planning charities that provide abortions or “promote” the procedure by providing patients with information about it, including by offering referrals to abortion providers.

Referred to by critics as the “global gag rule,” the policy has been subjected to a game of political football over the years, with Democratic presidents rescinding the policy upon taking office, as President Obama did in 2009, and Republican presidents reinstating it.

The move comes amid a roiling public debate about women’s rights, jump-started Saturday by women’s marches held in major cities around the world.

That demonstration will be countered on Friday by the annual March for Life in Washington, D.C.

The order also comes one day after the 44th anniversary of the Roe V. Wade Supreme Court ruling that made abortion legal.

“I think the president, it’s no secret, has made it very clear that he’s a pro-life president,” White House Press Secretary Sean Spicer told reporters at his first briefing Monday afternoon.

“And I think the reinstatement of this policy is not just something that echoes that value, but respects tax payer funding as well, and ensures that we’re standing up not just for life of the unborn, but for also taxpayer funds that are being spent overseas to perform an action that is contrary to the values of this president.”

The move signals the beginning of a long fight over abortion that will likely continue throughout Trump’s presidency.

Trump took traditionally Republican stances on abortion during his campaign, vowing to sign any legislation defunding organizations that provide the procedure and promising to appoint “pro-life” justices to the Supreme Court.

Vice President Pence is also a staunch anti-abortion advocate who passed several laws restricting the procedure while governor of Indiana.

During his time in Congress, Pence introduced several bills that would have banned federal funding for organizations that provide abortions.

Republicans and anti-abortion groups quickly praised the order as an advancement of “pro-life” policies and signaled that more would come throughout the Trump administration.

“Life is a precious and sacred gift, and we must do all we can to protect it,” said Rep. Michael Burgess (R-Texas), chairman of the House’s health subcommittee.

“I applaud President Trump for taking this important action and look forward to continuing to work together in advancing pro-life policies and protecting taxpayer dollars.”

Democrats denounced the order as an effort to “silence the discussion of women’s reproductive choices.” 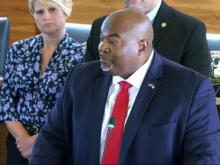