Kerry Washington and her husband Nnamdi Asomugha have welcomed a son to their family.

The famously private couple actually welcomed their baby on Oct. 5, but kept the birth under wraps for nearly two weeks. According to E! News, they named their son Caleb Kelechi Asomugha.

The actress’ due date had been a widely kept secret. On Sept. 17, the then-pregnant actress appeared on “Real Time with Bill Maher” and was asked when she was due and she only replied, “soon.”

Kerry informally announced her second pregnancy in May after showing up at the White House Correspondents’ Association Dinner sporting a baby bump.

“I will say I feel really, really blessed,” Kerry told to the Los Angeles Times in June 2014. “I just feel really blessed that I’m kind of living extraordinary dreams come true in my work life and in my personal life.”

In a chat with Entertainment Tonight, the “Scandal” actress said she doesn’t let Isabelle come to her set every day though.

“I’m pretty picky about when she’s allowed on set,” she said. “I go back to the trailer when I can. Sometimes she comes to visit on set but certain scenes, as you might be able to imagine, she is not allowed.”

As for how motherhood has changed the actress, Kerry gushed, “The thing that has changed the most about me since I became a mom is that my heart keeps getting bigger and bigger.”

Another thing that’s changed about Kerry is her body. In fact, after giving birth in 2014 she said she didn’t want her pre-baby body back.

“A few weeks ago, my manager asked: ‘Do you feel like you’re back? I feel like you’re back.’ She meant it as a total compliment, but we had this great conversation where I was like, ‘You know what? I try really hard not to use that language, because it’s not about going backward in life,'” Kerry explains.

50th NAACP Image Awards to Air Live on TV One March 30, 2019 From The Dolby Theater in Hollywood, Where the Show Will Be... 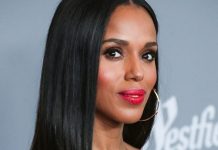