Security will be extra tight as tens of thousands of visitors descend on the National Mall on Saturday for the opening of the Smithsonian’s new National Museum of African American History and Culture.

President Obama and first lady Michelle Obama are expected to attend, along with former President George W. Bush and his wife, Laura. Obama, the nation’s first black president, attended the museum’s groundbreaking in February 2012 and will deliver remarks at the opening ceremony, which kicks off at 10:30 a.m.

The long-awaited museum traces the history of African Americans from slavery to today. Thousands of people have attended preview tours of the museum in recent weeks, including a Sept. 17 open house for charter members and a reception that evening for donors. Obama toured the museum last Wednesday with his family.

Federal and local law enforcement agencies are stepping up security for Saturday’s ceremony, including closing streets and screening visitors.

“It’s a big event,’’ said Becky Haberacker, a spokeswoman for the museum. “It’s a big event here in the city of Washington and, of course, because the president is attending that always adds more security … We’re all working toward making sure this event is very safe and enjoyable for everybody coming.’’

The National Park Service is leading security efforts in coordination with the Secret Service and Washington’s Metropolitan Police Department.

On Saturday, most streets near the museum, including Constitution Avenue between 12th Street and 18th Street, will be closed to traffic and parking, including buses.  Visitors are urged to take the metro. The closest stops are Smithsonian and Federal Triangle.

Visitors also will have to go through screening at the corners of 17th St. N.W. and Constitution Avenue NW, and 17th St. SW and Independence Avenue SW.

“The less stuff you’re bringing through, the faster you’ll go through security, the easier it will be to make it through the checkpoints,’’  Haberacker said.

The general public will be able to view the ceremony via jumbotron screens across the street from the museum on the grounds of the Washington Monument. 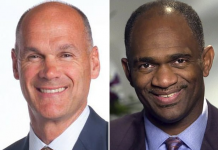 Here’s Where the Children Who Were With George W. Bush on 9/11 Are Now