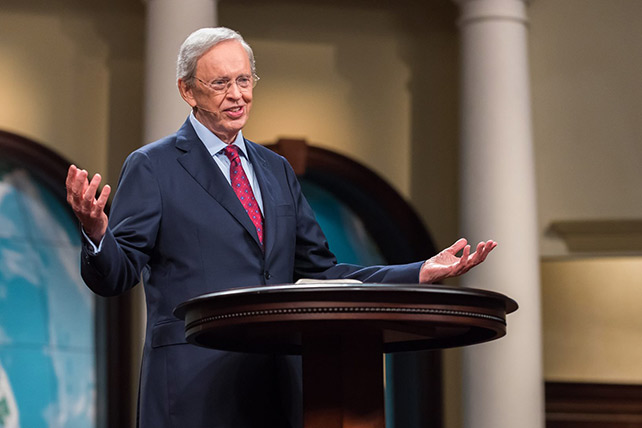 At 84, Charles Stanley still prays on his knees every day and preaches every week at First Baptist Church Atlanta, where he’s served as senior pastor since 1971. His age hasn’t come close to forcing him into retirement—the In Touch Ministries founder and author of the recently published Courageous Faith: My Story From a Life of Obedience has spent decades proclaiming the gospel, and he won’t let anything stop him. He has endured church politics, family tensions with his son Andy Stanley, and even the failure of his marriage at a time when a divorced Southern Baptist preacher keeping his pulpit was pretty much unheard of.

While the reasons for the Stanleys’ divorce in 2000 were kept private, the fallout wasn’t. Their separation prompted a church split and sent ripples throughout the Southern Baptist Convention, where the pastor had previously served two one-year terms as president. The elder Stanley was allowed to retain his position at FBC, but he has not remarried. Looking back, he now recalls how he felt as he faced the prospect of a lonely future:

When she decided to leave me, I decided to say, “Okay, God, I’ve done what you told me to do. I’ve been obedient to you. Now I’m going to trust you.” And I remember when I got the call from her attorney that she was suing me for divorce, and he asked me where to send the papers and I told him—and then when I hung up, I remember exactly what I felt. I remember saying, “God, you’ve been with me through every circumstance. You’re going to see me through this one.” I knew he would.

Stanley cites many sources of support for helping him through his divorce, including the loyalty of his friends, the empathy of his church members, and his growing awareness of others pastors who found themselves in the same position. More than anything, though, he cites prayer as the anchor that kept him stable as he navigated those choppy waters:

I start the day on my knees with the Lord. I end it that way. And oftentimes I’ll be studying and think, “It’s time for me to ask the Lord about something here.” And so for me, that’s the key. It’s the key to everything. Because what you are doing, you’re acknowledging God at the moment—you need his help, his insight, his understanding, or his courage, or his faith, whatever it might be.

I would say to anybody: the greatest lesson you can learn is to learn to live by faith on your face before God. You can face anything, no matter what it is. He said, “I’ll never leave you or forsake you,” but if I’m so busy I’m not listening to him, I’m not waiting for him, I’m not expecting him to do something—I think people face a lot of circumstances and go through a lot of heartache and trouble that would be unnecessary if they would just stop and listen.

Click here to listen to this week’s episode of The Calling.