Popular leader of Northwest Baltimore’s Empowerment Temple Church, the Rev. Jamal H. Bryant, is now the subject of growing online chatter after a woman brandishing the results of a DNA test, alleged the divorced preacher fathered a son she gave birth to last summer.

The Christian Post reached out to Bryant through his publicist, Nicole Kirby at Empowerment Temple Church, for this report on Tuesday but was told she was not in the building. She was also asked to comment via email on Tuesday morning, however, a response remains pending.

Latoya Shawntee Odom, a 34-year-old California woman, alleges in a salacious and exclusive report from Obnoxious Television that she engaged in a sexual relationship with Bryant which resulted in her getting pregnant. Bryant allegedly asked her to abort the pregnancy but she refused and gave birth last July to a boy named John Karston Bryant, according to official documents cited in the report.

Odom has not yet responded to a request for comment from CP.

The report highlights a paternity test carried out by LB Genetics and sent to Odom on August 12, 2015. LB Genetics is a DNA testing facility in California, specializing in paternity, family relationship, and human identification testing that is not only trusted by U.S. federal courts but by the reality stars of the Kardashian family.

A representative from LB Genetics, who would only gave her name as Delores, said she could not discuss anything in the document due to privacy laws.

“I can’t give you any information regarding testing or persons names because that’s violation of privacy,” she said.

She did confirm however that John Taddie, who sent the results to Odom, is the director of the facility. The tests results indicate that Jamal Harrison Bryant is 99.9999% John’s father.

“The alleged father, Jamal Harrison Bryant, cannot be excluded as the biological father of the child, John Karston Bryant, since they share genetic markers….The probability of paternity is 99.9999%, as compared to an untested, unrelated man of the Black population,” noted the test results signed by Karl-Hans Wurzinger and certified by notary public Oma Marquez Lopez.

Bryant, who was recently tapped to be one of four pastors expected to co-host a new faith-based talk show to be tested on FOX this summer called “The Preachers,” is no stranger to sexual scandals.

Bryant and his now ex-wife, Gizelle, both filed for divorce from each other in 2008 according to the Baltimore Sun. At the time, Bryant sought a “limited divorce,” while his wife has requested an “absolute divorce.”

Bryant and his ex-wife have three children together while he fathered two other children before that marriage. One of those children, he only acknowledged after an issue over his child support payments erupted in a court battle.

Odom alleges in the Obnoxious Television report that Bryant has been inconsistent with monthy $1,100 child support payments.

“Jamal requested and paid for a paternity test and is in fact the father of his one and only son (that we know of). He also agreed to pay his standard $1,100 a month for child support that all of his children baby mamas get for rearing his children. The issue is, he is inconsistent in paying his child support and refuses to be a father figure to his only son while rallying Black Lives Matter Campaigns and speaking out against the injustices of Black Men,” said the report.

In a 2013 interview with Roland Martin Reports, Bryant said if he hadn’t divorced his wife he was “confident” he would have been unfaithful again. He said he believes he became a better person after the divorce.

“I think I became a better person post the divorce than I was in the marriage. This journey has really been a process. She and I still are great friends and on two, different paths of life and are still able to operate in a meaningful way for the sake of friendship and parenting, but it was a necessary evil for me,” he said.

“And I say this, what I say to a lot of younger pastors: if I had not gone through the divorce, I’m confident I would’ve [done] it again. And so it was my Damascus road wake-up call that, you know, you are not ‘Teflon Don’; that humanity can still touch you and can still impact you,” he added.

The African Methodist Episcopal Church said Wednesday that the Rev. Jamal H. Bryant, leader of Northwest Baltimore’s Empowerment Temple Church, did not face a disciplinary trial in 2008 after a scandalous affair ruined his marriage because no one came forward with a complaint against him.

Bryant is now facing fresh allegations from a 34-year-old California woman who claims that he fathered a son with her last summer and has not consistently maintained child support payments.

“Rev. Bryant was never charged through the church system with anything,” said Jeffrey Cooper, chief information officer for the AME church, in an interview with The Christian Post Wednesday on whether or not pastors found guilty of adultery should face a lifetime ban from the pulpit.

According to the church’s website, Bryant is a “spirited third-generation pastor,” who started his church with just 47 members on Easter Sunday April 2000. Empowerment Temple Church is now described as the fastest-growing African Methodist Episcopal church in the denomination’s 200-year history, with well over 10,000 members.

Bryant’s father, Bishop John Richard Bryant, is also one of the Chief Officers of the Connectional Organization of the AME Church. These officers are elected for life by a majority vote of the General Conference, which meets every four years. Bishops are retired at the General Conference when the Bishop’s seventy-third (73rd) birthday is on or before July 15th of the General Conference Year. Bishop Bryant oversees the organization’s Fourth Episcopal District, which covers Indiana, Chicago, Illinois, Michigan, Canada and India. He is expected to retire in 2016.

Cooper explained that the AME church has a judicial process in place for persons who may find themselves having violated some laws of the church but the outcomes of this process vary according to each situation. In the case of Pastor Jamal Bryant, however, the church did not even start a process with him for any violations because no formal charges were brough against him by anyone.

“He was not subjected to a church process by way of anyone charging him with any particular crime and therefore there was no process that began with him or to end with him. There is nothing the church has investigated because the church was never presented with any claims against him by anyone,” Cooper stressed.

Research highlighted by the Pew Forum from the AME Church’s Book of Discipline explains how strict the church’s ecclesiastical law can be for just lay members alone. Lay members may be subject to discipline if they disrupt their congregation or behave in ways that, in the words of the church’s Bishop Clement Fugh, “exclude them from the grace and glory” of the church. This may include being rowdy during services, being drunk in public or refusing to submit to the authority of church leadership, notes the Pew Forum.

The Board of Stewards, which is a group of the congregation’s leaders, are responsible for investigating and issuing an opinion on charges laid against lay members who are allowed to explain themselves during the hearing. Possible punishments for offending lay members include suspension of membership or being barred from holding leadership positions in the church.

When it comes to sexual misconduct, if the charge involves a minor, the matter is immediately turned over to civil authorities for investigation. For other kinds of sexual impropriety – for example, when a minister is alleged to have had an extramarital affair with an adult congregant – the Board of Stewards of the minister’s congregation reports the charge to the presiding elder of that congregation, says the Pew Forum. The presiding elder then refers the allegation to the Judicial Committee of the Annual Conference to which the church belongs, which then investigates the matter.

“If the Judiciary Committee finds the charge is credible, it convenes a Trial Committee – comprised of 12 elders from the Annual Conference – and holds a formal trial. During the trial, the Judiciary Committee provides the evidence against the accused and may call witnesses. The accused may be represented by a secular lawyer, church elder or other counselor and may also call witnesses,” notes the Pew Forum.

Fugh noted however that the AME Church rarely employs its complex judicial system. With more than 4,000 AME congregations in the United States, he said at the time that “very few” cases arise each year against either laypersons or ministers.

CP calls to Empowerment Temple seeking comment from Bryant were not returned by press time. 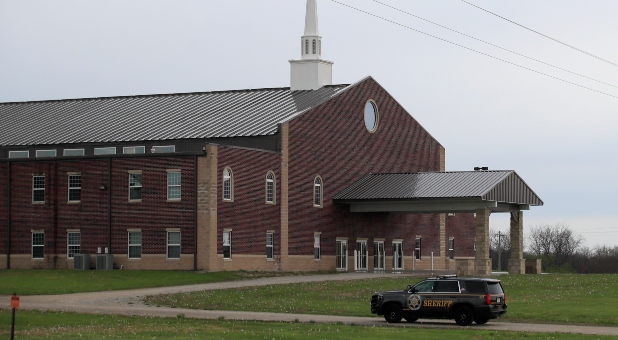