James Brown was more than a guy with a wild pompadour who danced.

He could be generous, but he also hoarded money. He valued family, but was arrested for domestic violence. His life mirrored issues of race, culture and class, and pop music owes him an enormous debt.

That’s only a bit of what author James McBride concludes in his new book, “Kill ’Em and Leave: Searching for James Brown and the American Soul.”

“He was very entertaining,” McBride says.

“But beneath that he was a deeply sensitive guy who cared tremendously about his community and his image and what people thought of him. He was wounded by a terrible childhood. I think what makes his story unique from others is there is not really one piece of American pop music you hear today that does not have some James Brown in it.”

McBride talked recently while driving into Manhattan from his home in Lambertville, N.J. The author will be at the National Blues Museum on Wednesday to discuss even further the self-anointed Godfather of Soul.

McBride, who made a name for himself with his memoir “The Color of Water,” primarily writes fiction. He won the 2013 National Book Award for his last novel, “The Good Lord Bird.”

And tracking down facts about Brown, who died in 2006, was so difficult that McBride can’t wait to return to the kind of writing that allows him to make stuff up. When the author was offered an inside story about the legendary singer, he says, his need for money after a divorce led him to accept.

But untying truth from gossip and fable and Brown’s own public persona wasn’t easy.

“James Brown didn’t want you to know” about his true origins, McBride writes. He was not “easily found or discussed or discovered — by anyone.”

McBride’s title comes from a line the Rev. Al Sharpton told him. After a concert, instead of mingling with celebrities and other stars waiting for him, Brown would sit for hours under a hair dryer, having his pompadour redone.

Much of McBride’s book reads more like an extended literary essay on race and music (McBride is an accomplished jazz saxophonist and a songwriter) than a traditional biography.

He sums up Brown’s early life, calling it “known-world material”:

Brown was born in Barnwell, S.C., in May 1933 or “thereabouts.” He was an only child and his mother “left his father when Brown was four, five, or six, depending on whom you ask. Whether she was driven away or departed on her own is an open question, as she is dead and no one can seem to remember. … Young James gathered coal, picked cotton, and hunted squirrels with his father, Joe Brown, a former sharecropper, who raised James with the help of extended family in the Ellenton, South Carolina, area, with female cousins who were more like sisters to Joe than cousins. Joe later took young James, nicknamed Junior, to nearby Augusta, Georgia, to stay with one of those female cousins — a cousin James called Aunt Honey — when Brown was still in grade school. Her Augusta home was filled with relatives and boarders and functioned, at times, as a brothel.”

At 15 James was convicted of stealing car parts and spent three years in a juvenile prison. Afterward, he soon started singing gospel in churches with a group later known as the Famous Flames, and they recorded a record called “Please, Please, Please.” 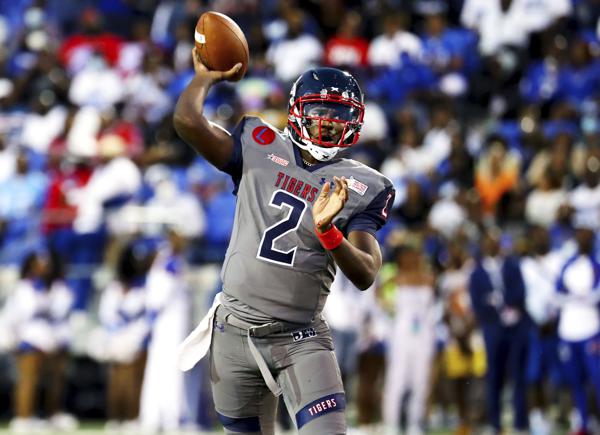