On the eve of Christmas 2015, a review of over 174,000 interviews conducted in 2015 shows that three-quarters of American adults identify with a Christian religion, little changed from 2014, but down from 80% eight years ago. About 5% of Americans identify with a non-Christian religion, while 20% have no formal religious identification, which is up five percentage points since 2008. 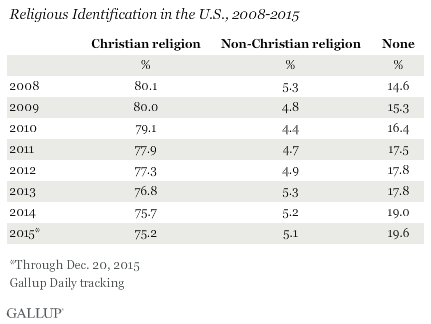 These results are based on interviews conducted each year since 2008 as part of Gallup Daily tracking. The general trends in the data over this eight-year period are clear: As the percentage of Americans identifying with a Christian religion has decreased, the percentage with no formal religious identification has increased. The small percentage of Americans who identify with a non-Christian religion has been essentially constant over this time period.

The downtick in the percentage of the U.S. population identifying as Christian over the past eight years is a continuation of a trend that has been evident for decades. In Gallup surveys in the 1950s, over 90% of the adult population identified as Christian, with only a small percentage claiming no religious identification at all or identifying with a non-Christian religion.

Despite these changes, America remains a predominantly Christian nation, and with 94% of those who identify with a religion saying they are Christian.

The broad Christian category includes Catholics, Protestants, Mormons and non-denominational Christians. In 2015, 24% of Americans identify as Catholic, 50% as Protestant or as members of another non-Catholic Christian religion, and 2% as Mormon.