Glendale, Ariz., resident Denese Montgomery can’t sleep. She’s been heartbroken since her only son, a Valley of the Sun businessman and former football captain for Arizona State University, was found shot to death last year in a Yavapai County creek.

The Yavapai County Sheriff’s Office and medical examiner say George Montgomery committed suicide, but his mother stays awake and ponders how he could have shot himself three times.

“To shoot yourself in the heart twice, you have to be some super being,” Denese Montgomery said.

There are reasons George Montgomery may have been motivated to take his own life. At the time of his death, sheriff’s deputies say state investigators were probing his role in an alleged multimillion-dollar Ponzi scheme, his family was about to be evicted from their Peoria Ariz., home, and he suffered from a degenerative brain disorder that’s been connected to head trauma caused by playing football.

The Sheriff’s Office investigation into Montgomery’s death remains open pending DNA test results of samples taken from his mother; his wife, Heather; and his former business partner, a former Phoenix police officer who is facing trial later this year on more than 60 felony charges of fraud, theft and selling unregistered securities as an unregistered dealer.

Citing the ongoing inquiry, Yavapai County investigators declined to comment for this story.

Investigators found a .380-caliber semiautomatic handgun in the water, according to the police report. It had one hollow-point round in the chamber, but the five-round magazine was empty. Authorities tracked the gun to San Diego, where it had been reported stolen in 2011.

Investigators found a backpack, a cellphone, a water bottle and several wet wipes near Montgomery’s body. “Non-linear” blood drops were spattered on the backpack and on several of the creek bank rocks.

Montgomery had been scouting for a campsite on July 30 along the Bell Trail in WetBeaver Creek Canyon near Sedona, police said. His wife said he called at about 7 p.m. and said he would soon head back to the Valley, but Montgomery never showed up.

Montgomery’s world was crumbling, Sheriff’s Office records show. The 43-year-old’s family had reportedly been served with an eviction notice the same day he traveled to Yavapai County, and he had missed a hearing in connection with a joint investigation by the Arizona Corporation Commission and the state Attorney General’s Office into an alleged $3 million Ponzi scheme involving a mining investment called Twin Peaks.

A representative from the Attorney General’s Office told sheriff’s deputies that Montgomery had been investigated before and was now the “main target” in a criminal case that had sprung from the scheme, according to police records.

Months after Montgomery died, the Attorney General’s Office indicted his partner on more than 60 felony charges.

An Attorney General’s Office spokeswoman said Friday that she could not comment on whether Montgomery would have been indicted with his partner.

A Corporation Commission investigator told deputies that Montgomery made about $500,000 from the scam and was “creating false spreadsheets to appease investors,” police records show. The investigator also told police that investors had not expressed “anger or real rage” at Montgomery; they believed he was on their side and blamed the partner more than him.

Montgomery and his partner were named as defendants in a pair of civil lawsuits filed before his death, Maricopa County Superior Court records show. Judgments against the defendants ordered them to pay about $1.5 million, records show.

Sheriff’s deputies questioned the business partner at his El Mirage home. He produced a receipt from a Glendale restaurant that accounted for his whereabouts on the night of July 30, police records show. 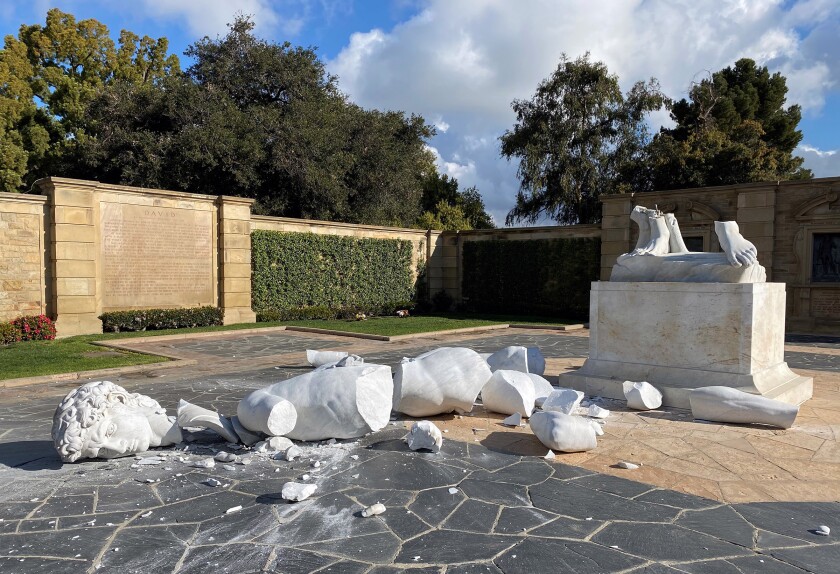 Replica of Michelangelo’s Statue of David at Glendale Cemetery Topples