A community activist who first came to the U.S. from El Salvador nearly two decades ago spent the weekend hidden in an Oregon church, becoming the latest immigrant to seek sanctuary as authorities try to deport him.

Francisco Aguirre, who has lived illegally in the U.S. for 19 years and has two children who are American citizens, is facing deportation due to a drug trafficking conviction 15 years ago and a previous deportation, authorities said.

Aguirre, 35, is now the coordinator of the Voz Workers’ Rights Education Project, a Portland nonprofit that runs a day labor center. He’s a well-known immigrant rights organizer and a musician who performs songs about social justice.

His case marks the first time in recent years that an immigrant has been granted sanctuary inside an Oregon church. During the past decade, as reform has stalled, churches around the country have offered refuge to immigrants who lack legal status.

Experts estimate about 300 congregations nationwide are willing and ready to give sanctuary to such immigrants. Immigration officials generally do not arrest people inside churches and other places of worship.

Aguirre has vowed to remain at Augustana Lutheran Church in Portland until he’s able to resolve his immigration case.

His immigration lawyer Stephen Manning says Aguirre is in the process of obtaining a U-visa, a special document for crime victims who help authorities investigate or prosecute cases.

Aguirre says he first entered the U.S. illegally in 1995. He worked as a day laborer and helped found the nonprofit group that operates the day labor center. Aguirre also runs a computer repair business from his home.

The U.S. Immigration and Customs Enforcement said Aguirre was deported to El Salvador in 2000 following a conviction for drug trafficking offenses. He then unlawfully re-entered the country, spokesman Andrew Munoz said in a statement.

Aguirre came to the attention of immigration authorities in August following his arrest for driving under the influence.

Due to his criminal history, previous deportation and most recent DUI charge, Aguirre is considered a public safety threat and a priority for removal by ICE, Munoz said.

Aguirre disputes the criminal prosecutions and says he was innocent, but a lawyer told him to plead no contest, a decision he now regrets.

The court documents could not be acquired on Monday; a court clerk said the case was so old the files have been stored in a warehouse.

Some Portland community leaders, saying Aguirre has become a role model for his peers, have launched a campaign to prevent his deportation.

“I believe I should be allowed to stay in Oregon, because I’m a good citizen, I’m a part of this community, and this is where I belong,” Aguirre said.

Aguirre took refuge at the church after immigration officials sought to arrest him Friday at his home in Fairview, a suburb of Portland. He says they couldn’t provide a warrant and left after he refused to come outside.

The 900-member Augustana Lutheran Church is one of several dozen churches in Oregon that are part of the sanctuary movement and have pledged to give refuge to immigrants living in the country illegally.

“A church is a place without borders,” the church’s pastor Mark Knutson said. “”It allows people to be and to sort things out… without guns, without coercion.”

The sanctuary movement was popular in the 1980’s when it sought to help Central American migrants fleeing civil wars to stay in the U.S. by letting them live in churches.

In 2006, it saw a revival when Elvira Arellano made international headlines after she took sanctuary in a Methodist church in Chicago, where she remained for a year.

Her order of deportation was never removed, and she was arrested in Los Angeles during a publicity tour in 2007 and deported to Mexico. She made her way back to the U.S. and was paroled by U.S. immigration authorities in March. An immigration judge will determine the outcome of her case.

This year, at least three immigrants found refuge in churches in Arizona. Earlier this month, a Chicago church offered sanctuary to an immigrant mother and her two children. 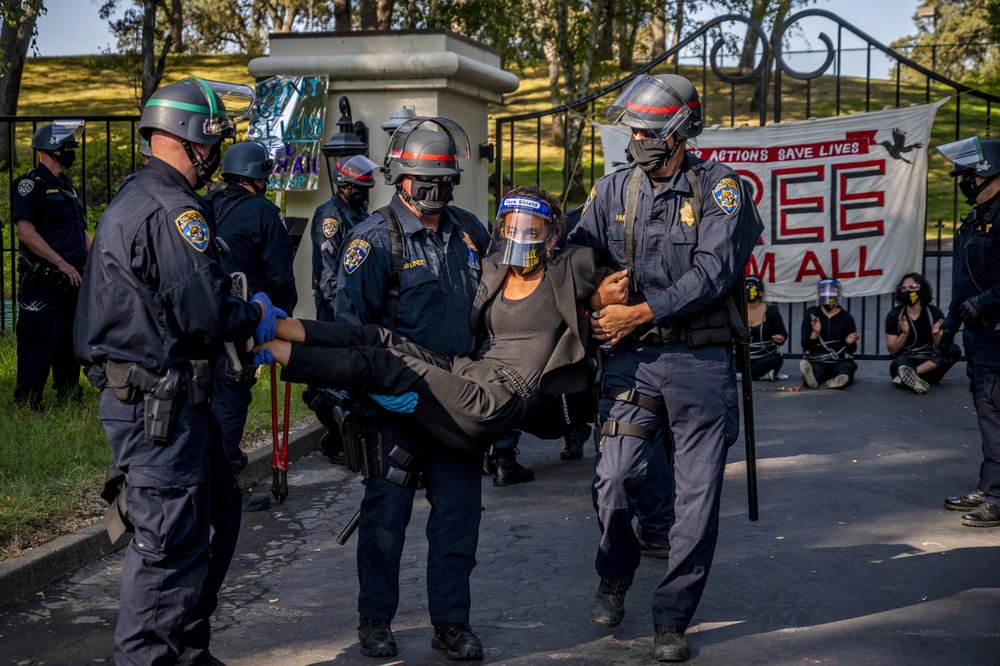 Demonstrators chained themselves to fence outside Gov. Gavin Newsom’s home calling for mass inmate releases and an end to immigration transfers