Gunmen killed at least eight people and burned down a church in attacks on two villages in Nigeria’s central Plateau state on Wednesday, a security official said.

Officers said they were investigating who was behind the raids in Nigeria’s “Middle Belt,” where its largely Muslim north and Christian South meet—a common flashpoint for violence.

Islamist Boko Haram rebels based in the remote northeast showed their reach in May by setting off bombs in Plateau state’s capital Jos, around 300 miles from their stronghold.

“Gunmen stormed the villages of Tanjol and Tashek … this morning and shot sporadically in the air, then killed eight people … The attackers also burnt a church and several houses,” said Captain Iweha lkejichi, from the joint task force combining army and police. 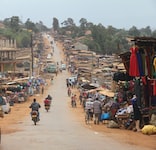