He is one of the longest continuously employed artists at Disney. In over 30 years, his contributions to animation have included several leading Disney characters, mostly heroines. His work includes: Princess Jasmine in “Aladdin,” Belle in “Beauty and the Beast,” Ariel in “Little Mermaid,” Young Simba in “The Lion King” and Mulan in “Mulan”. He was also the animator of the 2007 film “Enchanted”, and he directed the award-winning short film, “John Henry.” Additionally, he was the supervising animator of Princess Tiana in Disney’s “The Princess and the Frog.” He has been nominated for an Annie award four times: three times for Character Animation for “The Lion King,” “Mulan,” and “Winnie the Pooh,” and once for Short Animated Film Direction for “John Henry.” Recently, he served as one of the lead animators, overseeing the development of all of the characters on the Oscar winning film “Frozen”.

Emily Belz of World Magazine says that he is a Christian. In an interview, she asked him, “How does your faith play into your work, into character development and storytelling?” He said, “It’s a global impact as well as day-to-day and scene-to-scene. I’m very blessed. … This has been my boyhood dream to be a Disney animator. I’ve seen a lot of change and a lot of ups and downs. I was almost fired at one point. God has been incredibly gracious to allow me to be here, and I feel like this is where I’m supposed to be… God has gotten me through many a tough day and tough scene and tough production schedule. It’s nice to work for a company where the basic values we want to put across in our films are right in line with my faith.”

His name is Mark Henn.

This is the “Chief of Sinners,” Daniel Whyte III, president of Gospel Light Society International, reminding you of what the Bible says, that “Christ Jesus came into the world to save sinners” like you and me. Just as Mark Henn gave his life to Christ, may I encourage you to do the same. Here is how:

First, please understand that you are a sinner and that you have broken God’s laws. The Bible says in Romans 3:23: “For all have sinned and come short of the glory of God.” Please understand that because of your sins, you deserve punishment in hell. Romans 6:23 says “the wages of sin is death…” This is both physical death and spiritual death in hell.

But here is the good news. John 3:16 reads, “For God so loved the world, that He gave His only begotten Son, that whosoever believeth in Him should not perish, but have everlasting life.”

The phrase “For God so loved the world” means that if you are in this world, God loves you no matter what you have done.

The next phrase, “that He gave His only begotten Son” refers to Jesus Christ. He is God’s son who suffered, bled, and died on the cross for your sins and for mine, and He was buried and rose again.

Our next phrase is “that whosoever believeth in Him”. The word “whosoever” means anybody at anytime. The phrase “believeth in Him” means to trust in Him, to depend upon Him, to rely on Him, or to have faith in Him for your salvation.

Our next phrase, “should not perish”, refers to eternal punishment in a place called hell.

And, lastly, the phrase “but have everlasting life” means to live eternally in Heaven with God.

The Bible also says in Romans 10:9 and 13: “That if thou shalt confess with thy mouth the Lord Jesus, and shalt believe in thine heart that God hath raised him from the dead, thou shalt be saved…. For whosoever shall call upon the name of the Lord shall be saved.” 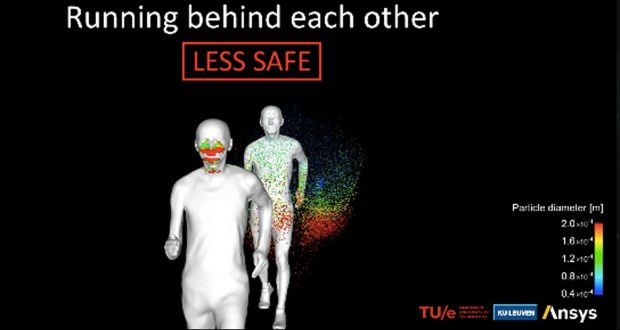 WATCH: Video Shows Coronavirus Particles From Runners Can Infect You Even if You’re 2 Meters Away as Social Distancing Guidelines Mandate