Nearly 74 percent of Americans have left a job to pursue their true passions – and 60 percent of those landed a gig in their new chosen field, according to a new survey.

As unemployment reached a record low in April of 3.9 percent, some Americans are looking for more satisfaction from their jobs – and many say they they’re willing to take a risk to pursue careers that give them a sense of purpose.

The top three industries that employees left behind were retail, hospitality and finance – with careers in the arts, education and technology being the most desirable, according to the survey of more than 1,000 people by NetQuote.com. 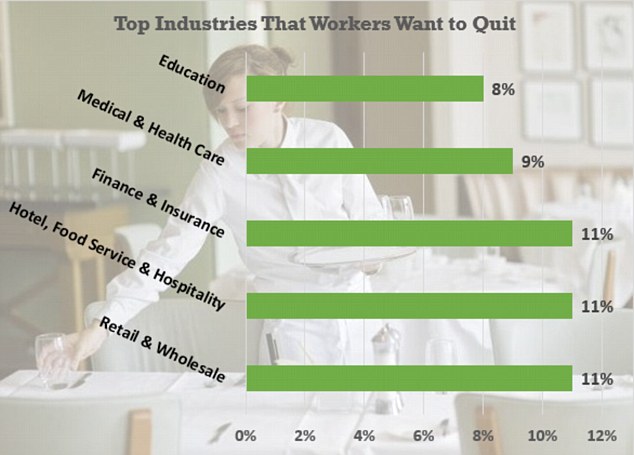 Retail and wholesale jobs were the careers that American workers were most eager to quit, with 11 percent wanting out of those jobs, according to a new survey. Careers in hotels, food service, hospitality, as well as finance and insurance were close behind with 10.9 percent and 10.8 percent of workers saying they wanted to leave those respective jobs behind 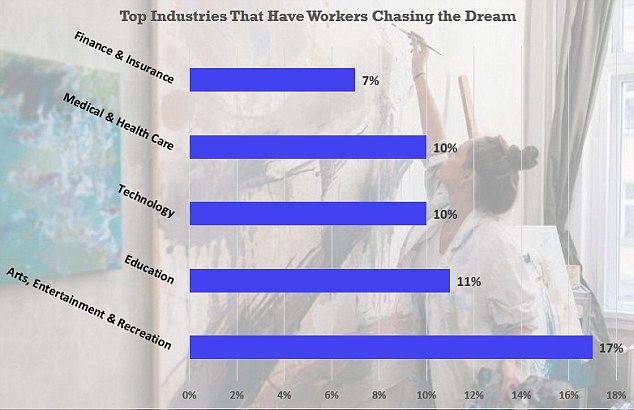 The most desirable career options for Americans looking for a job they’re passionate about are in the arts, entertainment and recreation, with 17 percent of survey respondents saying that’s what they would like to pursue

‘Doing meaningful work is the most important thing (to workers),’ said Max Augliere, project manager for NetQuote.com. ‘That means as a leader, as a boss, you can do things to make your employees feel they’re doing meaningful things to retain those workers.’

However, the change didn’t always pay off in the traditional sense. Almost half (47 percent) of the people who were successful at starting a new career reported earning less money as a result. Another 32 percent said they went on to make more money, while 21 percent made the same amount.

Americans aren’t rushing into these life-changing decisions. On average, it took people 19 months of deliberation before they decided to pursue their dream – whether it be a new career or more education.

The survey also found generational differences. Baby Boomers were mostly likely (79 percent) to report having made a passion-motivated career leap, compared to 72 percent of Generation Xers and 73 percent of Millennials.

Millennials were age 22 – the youngest of the three generations, on average – when they decided to make a career change. People of Generation X reported making the switch at 27 and Baby Boomers at age 36. Overall, 30 was the average age that Americans quit their job to pursue a dream.